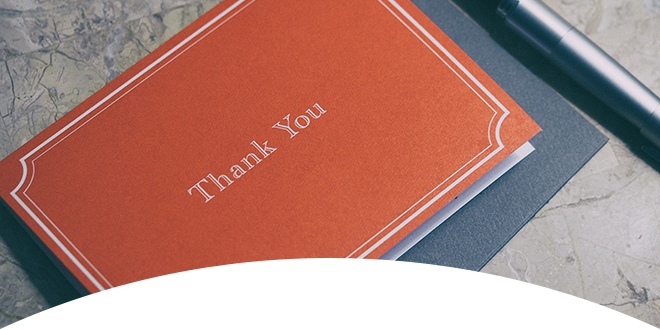 Top 5 ways to say “thank you” in English

As you probably all know by now, English is a language which is rich in vocabulary, meaning that we are never short of a word or synonym for how to describe something, which is ideal if you are a fan of mixing things up from time to time. Today we are going to be looking at a variety of ways which you can express “thanks” instead of having to revert back to the bog-standard “thank you”.

Cheers to @abaenglish for expanding my English vocab. #thank you

Probably best known for being said when people are making a toast to celebrate something or someone at a special event however this can also be used to express thanks. It is worth noting that this is very common in the United Kingdom but not so much in the United States, however it is globally understood in the English speaking world.

I just want to say cheers to everyone for coming along to the pub to celebrate my birthday with me.

This must seem like a strange word as it only has two letters but has the meaning of “thank you”. This short but to the point way of expressing thanks is really resigned to the United Kingdom and is not likely to be globally understood in the rest of the English speaking world. Funnily enough if you double “ta” to “ta ta” it actually means “bye” instead of thank you.

Ta for making me a cup of tea, mum.

Saying “much obliged” or even hearing someone else say it is quite possibly something that hasn’t happened to you but don’t worry because this expression of thanks is not very common at all. In fact, even hearing someone say this nowadays would make your head turn. It is generally seen as being very polite and almost creates a sense of upper class. If you want to be posh then this is the way for you.

Here’s the lawnmower you asked to borrow, David.

Thanks John, much obliged.

This may sound like a strange way to thank someone but is actually very common in English. It is more used if you ask someone to do something for you or perhaps pick you something up and they do it. Naturally because they have done what you asked them to, you thank them by calling them a lifesaver because they helped in your period of need. This is definitely one to say if you want to seem more like a native.

You’re a lifesaver for taking me to the airport because if you hadn’t, I would have missed my flight.

When someone does something for you that you really love and feel very grateful for you can show your thanks to them by telling them that you “appreciate it”. In this instance “it” refers to the action or whatever is being thanked for. This could be very common in business situations and has connotations of formality associated with it. Use it to impress your boss.

All your help when moving house was amazing, I really appreciate it.

As you can see, the English language like we said previously is rich in vocabulary for many different types of situations. Now you can start to incorporate these new ways of showing gratitude into your own everyday English to show the variety of vocabulary you have.

Are you thankful for having learnt these other ways to say “thank you”? Would you like to learn more English with us like millions of other students?