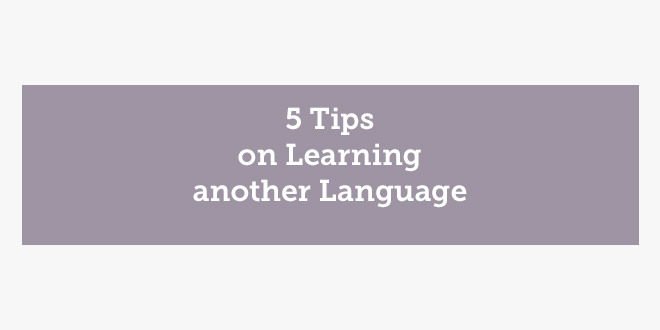 5 Tips on Learning a New Language

Have you ever wondered what the best way of learning a language is?

Most people have, and that is one of the questions we get asked most of the time here at ABA English.

Let’s take a look then at some tips and tricks to make learning a language that little bit easier!

This is something that most people don’t realise, but by learning fixed expressions or sentences you are able to respond when asked a question, or you are able to do the asking!

If someone had to say to you “Do you speak English?” it would be useful for  you to have a learned response like “Yes, I am learning English at school.”  Even if you have not learned what the form “I am learning” is called, at least you have learned a response without focusing too much on the grammar. Another example would be “ Why are you learning English?” Your response could be one of many: “Because I like it” or “I want to live in Australia one day.”

Not that grammar is a bad thing, of course. But, we need to realise that by focusing more and more on grammar alone, sometimes we can get lost in trying to understand the language!

So, learn some fixed sentences or expressions so the next time it’s raining, for example, you can turn to someone and say “It’s raining cats and dogs” or “ It’s really coming down.” By doing this you will gain confidence and you will start having longer conversations.

Those words are just a few of many!

Ok, so you might be thinking… That’s all fine and dandy if you want to learn European languages, but what about far off languages like Japanese?

Well, take a look at this video just to have a look at all the similarities between English and Japanese words.

The bottom line is this: if you are trying to learn English, you are bound to find some words which may be similar. Look them up on the internet!

3. Immerse yourself in the language (without leaving the house!)

How can you learn English properly without leaving your own country?

With today’s technological advancements and the internet it has become very easy for people around the world to learn another language and immerse themselves fully in it.

Firstly, start by watching films in the language you want to learn. This is one of the best ways of getting used to the different accents which exist. It also helps to see the language from a cultural perspective; by learning jokes or slang words in the language.

Secondly, look online for a “Pen-Pal.” A “Pen-Pal” is someone who lives in another country (preferably the country of the language you wish to learn) and start writing to each other.

There are many safe internet sites where you can start a language exchange with people from all over. They can tell you about their country and you can tell them about yours.

Lastly, listen to music. We are all born to love music. Look for the kind of music you like, print the lyrics and sing along. Singing is a great way to practise fluency and to get over the fear of being shy. If you feel up to it sing and practise your pronunciation in front of the mirror to notice any mistakes you may make.

Make yourself a deal! Challenge yourself to learn 5 new words or phrases in English a day!

That’s right. Do whatever you have to do in order to learn them. Stick them on the wall next to your bed. Put them on the fridge door so every time you go into the kitchen you see the words. Or simply write them down.

As humans learn by doing, so once you have the word in your mind, write it down so you don’t forget it.

We all know it’s hard and frustrating to learn a new language. But the most important thing is to never give up! After all, it’s just a language, so have fun with it and enjoy yourself while you are learning. Before you know it you will sound like a native speaker!