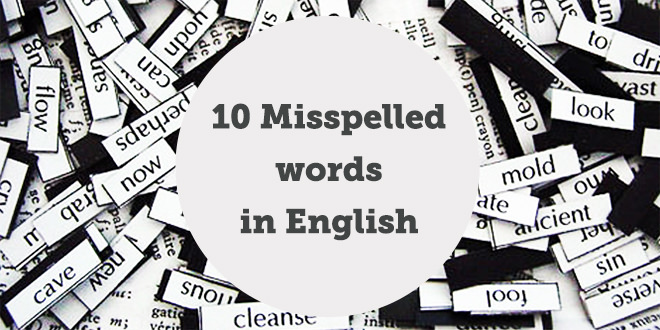 We realise the difficulty that non-native English speakers may have in spelling some tricky words in English, that’s why we have come up with a quick list that helps you learn the 10 most commonly misspelled words in the English language.

It’s important to write them down often so that you can practise the spelling and soon you will not make another mistake again. We promise!

Let’s take a look at the words.

Often the suffix –able is confused by –bile or -ebl, but just remember that if you go to a restaurant be sure to accept the t-able someone offers you!

Remember that this word is big enough to accommodate two c’s and two m’s.

An all time favourite in which we always make a mistake of placing the e before the i. You must believe that “i” usually comes before “e” except after “c”.

A silent “n” is commonly placed after an “m” so just try your best to not forget.

Even though the sound may be a “shhh” don’t have a bad conscience if you make a mistake by placing the “c” before the “s”.

It may sound like it ends with an “it” but don’t forget the silent “e”.

This is one of many words in English that violate the i-before-e rule!

It may sound “great” to say the word grateful, but there is nothing “great” about it!

Don’t show the world your ignorance by spelling this word -ence!