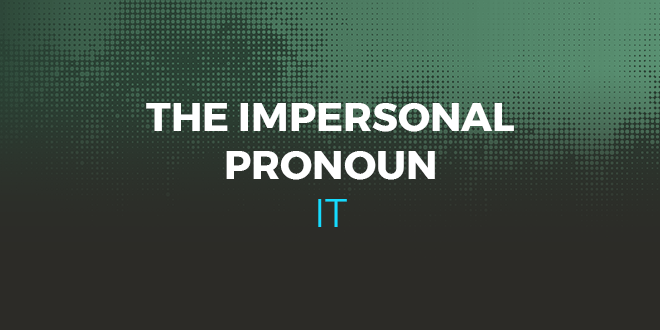 The impersonal pronoun “it”

We’re back and we have another action packed grammar blog post for you, so that you continue to improve your level of English. Today we are going to be focusing on the impersonal pronoun “it” and when it tends to be used in the English language.

When do we mainly use “it”?

The expressions in which we tend to use the pronoun “it” are those which refer to things and animals. Yes, animals are referred to as “it” in English.

Where is my watch?

It’s on the table.

This is my new car. Do you like it?

What type of dog is it?

Are there other ways to use the impersonal pronoun “it”?

In addition to the most common uses with objects in general along with animals, we also use it when we refer to time and dates.

What time is it?

Examples of days and dates:

It’s the 15th of December

Are there more grammar structures where we use “it”?

When we have a certain structure in a sentence, we can use “it” as an impersonal pronoun. This generally happens when “it” describes actions and is followed by the infinitive form of the verb.

It’s wonderful to be in love

It’s expensive to travel to Japan

Additionally, “it” is used to refer to people in phone conversations when we do not know who we are speaking to.

Last but not least, we use the impersonal pronoun “it” in sentences which use sense verbs. When we refer to sense verbs we mean verbs such as “to look” and “to sound” among others.

It looks okay to me.

It would be a good idea to take your time and learn all of the examples at your own pace. Remember that studying for half an hour a day is much better than 3 consecutive hours once a week Remember that for more information on the impersonal pronoun “it” you can check out unit 104 of the ABA course.