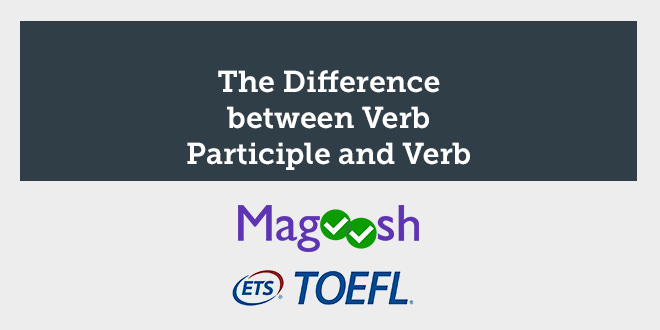 The Difference between Verb Participle and Verb Tense

In grammar lessons, you’ve probably heard the terms “verb participle” and “verb tense.” You won’t often use these terms in everyday English conversation, and you probably won’t need to use terms like these on the TOEFL either.

But understanding the difference between verb tense and participle will definitely help you comprehend complex English sentences in TOEFL Reading.  And mastering these two grammar concepts will boost your TOEFL Writing and Speaking skills too.

But a ​participle​ isn’t the ​only​ grammatical function that change a verb’s form in this way. ​These verb forms you see in participle verbs can also occur in tensed​ verbs​. A verb ​tense​ indicates when the action is taking place—in the past, present or future.

If you use a past participle verb, then the verb acts as an adjective to describe a noun in terms of how that noun is treated or what is done to the noun. Thus, “a raced horse” describes a horse that is raced against by other things. If you tell someone your horse is a raced horse, people will immediately understand that other things—probably other horses—race ​against​ your horse in competitions. To give an example with an irregular verb, someone who lost their job would say that they were a paid worker in the past, a currently employed person could say they are a paid worker right now, and a person who plans on getting a job can say they’ll be a paid worker in the future.

The ability to use verb tense and verb participle together in writing and speech shows great fluency in English. This kind of fluent verb form use can help you get a top score on the TOEFL. Understanding the difference between adjectival participle verbs and tensed verbs also makes it easier to understand reading passages and speech that use both types of verb form. And as an added bonus, mastery of these two forms helps a lot with sentence correction exercises in other English language standardized tests such as the ACT, SAT, GRE, and GMAT.

*****
This post was written by David Recine, expert at Magoosh TOEFL. For more help with the reading section, learn more here about the best TOEFL reading practice.