The British Tradition of Afternoon Tea is Back

Between 3pm and 5pm a teapot and cups appear in the living room and the family gets together to enjoy a cup of tea and a biscuit. The tea is brewed in the teapot and served with milk and sugar.

“In England it’s a time honoured tradition. The British have been taking afternoon tea since the eighteenth century. Once the preserve of visitors and ladies who lunch, London hotel Claridges says afternoon tea is becoming increasingly popular for those seeking business and pleasure.

– You see a great deal of the fashion industry, you see a lot of our female business clients using the afternoon tea period for business meetings, you see a lot of celebrations be it a birthday, an anniversary, and I guess for each party it’s interesting to be part of the other.

Clardiges recently won the Tea Gild’s award for best afternoon tea in London for the second time. It serves a traditional combination of savoury sandwiches and sweet scones and cakes, with a choice of tea or champagne.

Beverly Elliot is having afternoon tea to celebrate her 50th birthday.

– It’s nice to get dressed up and it’s nice to come somewhere that’s special, for a special birthday.

Claridges executive chef, Martin Nails, used to be for the elite but not anymore.

– I’ve noticed a change in the style of guests that comes to the hotel. I think it’s more accessible now to everybody which I think is a lovely thing because I think people in the past would’ve looked and thought “Gosh, I wouldn’t go in there”, so part of the battle is getting them in.

Janet Green, communications director for luxury car maker Aston Martin, says she prefers to do hard business over a cup of tea.

– It encourages you to relax and talk and that’s what, from an Aston Martin perspective ,we like to do rather than the formality of formal lunches or dinners.

The sign of the times that a classy kind of cuppa is now in vogue.” 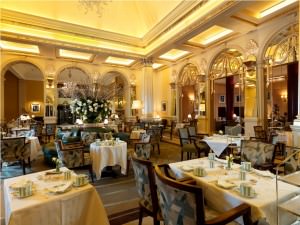 Teapot – (noun) a pot that is used for making and serving tea and that has a spout and handle.

Preserve – (noun)  an activity, job, interest, etc., that is available to or considered suitable for only a particular group of people.

Savoury – (adjective) having a spicy or salty quality without being sweet.

Scones – (noun) a small, often sweet bread that sometimes has pieces of dried fruit in it.

Elite – (noun) the people who have the most wealth and status in a society : the most successful or powerful group of people.

Encourages – (verb) to make (someone) more determined, hopeful, or confident.

Cuppa –  (noun) an informal way of saying a cup of tea.

2011-08-26
Share
Previous Teachers’ Tips – Are you a sprinter o a long distance runner?
Next Day to Day Sentences: “He is the best”