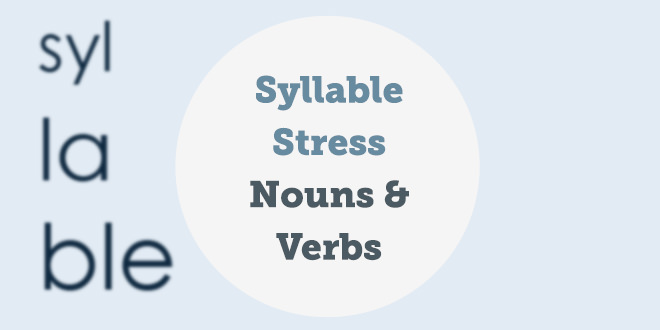 Syllable Stress in Nouns and Verbs

Today we are going to concentrate on an important pronunciation topic: where we put the stress on words where the noun and verb have the same spelling.

What is the rule?

The general rule in English when we have two words which are the same (one being the verb and the other the noun), is that the stress when saying the noun is on the first syllable and with the verb is on the second syllable.

These are examples of the stress on the nouns as can be seen by the emphasised first syllable – try saying them aloud to practise!

Remember, however, that the verbs of these nouns will be pronounced differently.

This rule is very easy to remember: noun = first syllable, verb = second syllable. It is also important to mention that not every noun has a verb which is spelt the same and vice versa. If you learn these easy steps your pronunciation will improve.

For more grammar tips, sign up for free today at ABA

We @abaenglish urge you to recORD yourself saying these to see the CONtrast!

nouns pronunciation Syllable verbs 2016-04-28
Share
Previous Gerunds- When and Why?
Next Do Mixed Conditionals mix you up?