Ready to find out what happens next in “The Decision”?

If you forgot to read Chapter 7, don’t worry! Here it is: The Decision Chapter 7.

They drove for about two hours. Possibly the drive was longer, but the wine was affecting his judgement.

They arrived at quite a large house and it was isolated from the urban bustle of the crowded town. They must have left the city behind a long time ago.

Seconds later, a light turned on inside the house. Mike looked up and, before he had time to put his thoughts in order, a woman came out of the house.

“A little bit tired”, he answered.

The woman was about thirty five years old, dressed in a tailored blue silk blouse and grey trousers. Short, blond hair, high heels and almost ruby red lips. She was rather pretty. At any other time, Mike would have thought that she’d be the perfect lover, but the only thing on his mind at that moment was having a hot bath. As he was thinking this, the woman surprised him by asking a difficult question:

Where was what? Thought Mike. Who? Was he supposed to know? 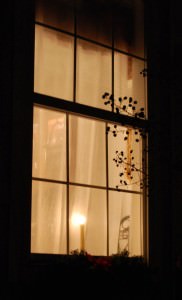 Judgement – an opinion or decision that is based on careful thought.

Isolated – separate from others. In this case, it means there were no other houses near by.

Tailored – to make (clothing that is measured to fit a particular person).

Silk – a smooth, soft, and shiny cloth that is made from thread produced by silkworms ; also : the thread that is used to make silk.

Blouse – an often somewhat formal shirt for women and girls.