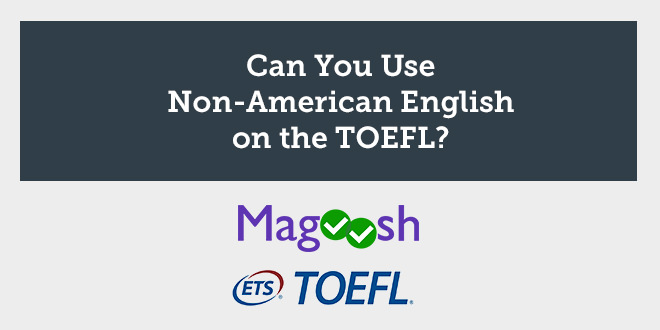 Non-American accents: are they a good choice for the exam?

The TOEFL is a very North American exam. The test is sponsored by ETS, a California-based test prep organization. And the exam is pretty much universally accepted by schools in the USA and Canada. Moreover, all written English on the exam uses American spellings of words instead of British ones. And almost all of the speakers on the audio tracks have North American accents.

Because of this, you might understandably wonder if it’s OK to use non-American forms of English on the TOEFL Speaking and Writing sections. If you learned English from U.K., Irish, or Australian, or New Zealand instructors, I have some good news: you can use the non-North American English you’ve learned when you give your TOEFL responses.

Still, be careful. British Isle and “Down Under” forms of English use a different spelling system than the standard North American one. When you study for the TOEFL, you’ll see North American spellings rather than the ones you’ve used in the past. And you’ll hear lots of North American pronunciation during TOEFL listening practice.

If you’re not careful, you could get the two different spelling systems and the several different accents of the native English speaking world mixed up. If you are suddenly switching from one form of English to another, your writing and speech can sound jumbled and confusing. This can give your TOEFL responses a lack of clarity.

If you have inconsistent spelling and your English pronunciation comes from two or three different continents, your responses will be difficult to understand. And this will of course hurt your TOEFL score. So if you’re more comfortable doing a non-American native English accent on the exam, choose one other accent and stick with it. Train yourself to be consistent. This doesn’t just help you on the TOEFL—it will also help you communicate more clearly in English once you arrive at your future campus.

So when you’re giving TOEFL responses, always aim for English that is similar to the speech and writing in the “big Six” English-speaking countries that I mentioned in the first two paragraphs of this article: Australia, New Zealand, the United Kingdom, Ireland, the United States, and Canada.

*****
This post was written by David Recine, expert at Magoosh TOEFL. For more help on the TOEFL, take Magoosh’s free TOEFL practice test.