Have you heard of TED Talks? If not, you should check out their website. They have lots of videos from speakers talking on many different topics and subtitles in many languages. It’s a good way to practice listening!

Have you heard of storm chasers? They are people who go after storms to study them and take photos.

Photographer Camille Seaman has been chasing storms for 5 years. In this talk she shows amazing photos of the skies.

1. Read the text
2. Understand the vocabulary
3. Watch the TED talk

Everything is interconnected. As a Shinnecock Indian, I was raised to know this. We are a small fishing tribe situated on the southeastern tip of Long Island near the town of Southampton in New York.

When I was a little girl, my grandfather took me to sit outside in the sun on a hot summer day. There were no clouds in the sky. And after a while I began to perspire. And he pointed up to the sky, and he said, “Look, do you see that? That’s part of you up there. That’s your water that helps to make the cloud that becomes the rain that feeds the plants that feeds the animals.”

In my continued exploration of subjects in nature that have the ability to illustrate the interconnection of all life, I started storm chasing in 2008 after my daughter said, “Mom, you should do that.”

And so three days later, driving very fast, I found myself stalking a single type of giant cloud called the super cell, capable of producing grapefruit-size hail and spectacular tornadoes, although only two percent actually do. These clouds can grow so big, up to 50 miles wide and reach up to 65,000 feet into the atmosphere. They can grow so big, blocking all daylight, making it very dark and ominous standing under them.

Storm chasing is a very tactile experience. There’s a warm, moist wind blowing at your back and the smell of the earth, the wheat, the grass, the charged particles. And then there are the colors in the clouds of hail forming, the greens and the turquoise blues. I’ve learned to respect the lightning. My hair used to be straight.

What really excites me about these storms is their movement, the way they swirl and spin and undulate, with their lava lamp-like mammatus clouds. They become lovely monsters.

When I’m photographing them, I cannot help but remember my grandfather’s lesson. As I stand under them, I see not just a cloud, but understand that what I have the privilege to witness is the same forces, the same process in a small-scale version that helped to create our galaxy, our solar system, our sun and even this very planet.

All my relations. Thank you. 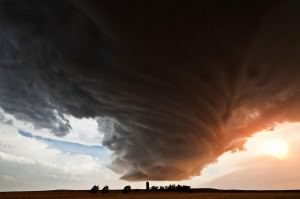 Tribe – a group of people that includes many families and relatives who have the same language, customs, and beliefs.

Perspire – to produce a clear liquid from your skin when you are hot or nervous.

Stalking – to follow (an animal or person that you are hunting or trying to capture) by moving slowly and quietly.

Hail – pieces of ice that fall from clouds like rain.

Ominous – suggesting that something bad is going to happen in the future.

Tactile – relating to the sense of touch.

Spin – to turn around and around repeatedly.

2014-02-18
Share
Previous Valentine’s Day in an Infograph!
Next Advanced Grammar – Compound Words with ‘Any’