Today we are going to learn some English vocabulary with the news. Watching the news in English is a great way to find out what’s happening in the world so we can talk about it with other people.

That’s the best way to learn!

“The onset of fall brings a majestic sight to Michoacan in Mexico. The arrival of millions of Monarch butterflies that descend on the 13,000-hectare butterfly reserve.

The Monarchs travel thousands of miles to flee the cold winter of Canada and the U.S. to hibernate and reproduce here, in the temperate woods of central Mexico. But this year their numbers could drop, according to Rosendo Caro the director of the reserve.

– The butterfly has been affected by the prolonged drought in western U.S. and in Mexico’s north east. The drought affects the butterfly because its feeds from wild plants.

The annual spectacle draws tourists, scientists and locals alike. And local businesses depend on a thriving butterfly season.

– When the butterflies come we can make some money and it’s a benefit for the other land owners, they get their cut.

Many scientists blame extreme weather caused by climate change for the population’s decrease.” 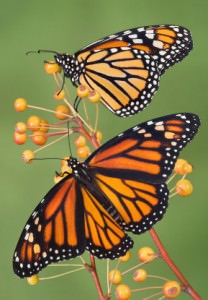 Onset – the beginning of something.
Example: “I knew from the onset that she was going to get the job”

Fall – the season between summer and winter. In Brittish English we say “Autumn”
Example: “My favourite month is October, in fall, because it’s the perfect temperature”

Flee – to run away from danger.
Example: “When the storm came, all the animals fled away”

Hibernate – to spend the winter sleeping or resting.
Example: “Bears hibernate in winter, it’s too cold!”

Temperate – having temperatures that are not too hot or too cold.
Example: “I want to live in a temperate country, like Spain”

Drop – a decrease in amount or quality.
Example: “The amount of customers drop after Christmas, nobody has any money”

Prolonged – lasting longer than usual or expected.
Example: “It was a prolonged winter, it lasted until March!”

Drought – a long period of time during which there is very little or no rain.
Example: “The drought was terrible, we had no water for months”

Feeds – to give food to something or someone.
Example: “I feed my cat every morning and every evening”

Thriving – to grow or develop successfully : to flourish or succeed.
Example: “My flowers are thriving in the garden”

Get their cut – a part of something that is divided and shared among people.
Example: “We all got a cut of the bonus”

Decrease – to become smaller in size, amount, number, etc.
Example: “The number of whales has decreased over the years”