As I’m sure all of you know, Obama just won the election and has been proclamed President for the second time.

We’re are going to do a little bit of English, by listening to a news article on penguins!

To most people they’re endearingly innocent…but to pensioner Barbara Wallers the African penguin is public enemy Number One.

– Look what they have done to the bushes here, they have killed all the garden.

The endangered bird is at the forefront of the latest conflict between mankind and nature playing out on South Africa’s scenic Boulder’s Beach. An oblivious penguin army numbering thousands have overwhelmed beach barriers and wandered inland onto properties. Waller says she’s had enough.

– The stench, which stinks like hell, which is a health hazard, I get terrible Hay Fever, sore eyes, etcetera, etcetera. Then we have got all the Guano and the feathers and when the wind blows we get all this bloody black rubbish in our house, and the noise at night is unreal – they bellow and bellow and bellow, I did not sleep last night from 3.45 the other morning.

Boulder’s beach is a nature reserve in the Betty’s Bay area. It provides a safe haven for birds, protecting them from the effects of human settlement, commercial activities and pollution. But residents like Johannes Klopper say the birds are flocking inland in an unwitting land grab that’s wreaking devastation on their land and property. He wants the local council to act fast.

Residents blame the invasion on inadequate, poorly maintained fencing, and accuse the authorities of breaking promises to fix them. Conservationist Margaret Roestorf says the African penguin population has decreased by 90 percent in the the past century. She’s appealing for a common sense solution to the problem.

– It’s a real sadness because there should be a co-existence between the penguins and the people. I think there are many people in Betty’s Bay that absolutely adore the penguins, so I think it would be wonderful if the organisations that manage them which is Cape Nature Reserve and Overstrand and the people of Betty’s Bay can take hands and this thing can quietly be resolved.

The council says the fence will be repaired and extended soon, but until then they say, they’re asking for cooler heads to prevail in the battle of Boulder beach. 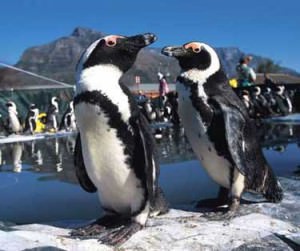 Endearingly – to cause (someone) to be loved or admired by (someone or something).

Bushes – a plant that has stems of wood and is smaller than a tree.

Endangered – used to describe a type of animal or plant that has become very rare and that could die out completely.

Forefront – the most important part or position.

Overwhelmed – to affect (someone) very strongly.

Stinks – to have a very bad smell.

Hazard – a source of danger.

Hay fever – a sickness that is like a cold and that is caused by breathing in plant pollen.

Bellow – to shout in a deep voice.

Unwitting – not aware of what is really happening.

Wreacking – to cause (something very harmful or damaging).

Prevail – to be usual, common, or popular.

2012-11-07
Share
Previous Learn English with the News: “Día de los Muertos”
Next Learning English with Songs: “Home is wherever I’m with you”