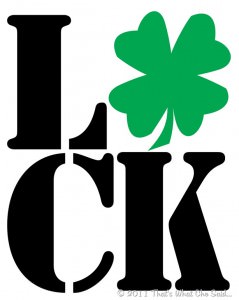 So last Friday was Friday the 13th, a day that is unlucky in both Western and Eastern cultures. But why? The origins aren’t perfectly clear, but we do know that both Friday and the number 13 have been considered unlucky for centuries. In the late 19th century, people began to put the two together to form the unluckiest day of all.

Did you know there are people who have a phobia of Friday 13th? It’s called friggatriskaidekaphobia.

We thought it was the perfect day to learn six expressions related to luck. Ready?

This expression is used as a way of sarcastically describing the impossibility of something. We would say it if someone tells us something that is highly unlikely to happen.

Example: “I hope I win the lottery this year. Fat chance it’ll happen though…”

Luck of the draw

If something is the luck of the draw, it is the result of chance and you have no control over it.

Example: “Students are picked by luck of the draw: the first students to be called are the first to take the exam”

A stroke of luck

This expression is used to describe a bit of luck; a lucky happening. Especially if we didn’t know it was going to happen.

Example: “Mari has had such a stroke of luck! She won the competition and got 1,000$”

Beginner’s luck is absolute luck; the luck of an inexperienced person.

Example: “This was Tony’s first time playing the lottery and he won! It was beginner’s luck”

As luck would have it

This means by good or bad luck; as it turned out; by chance. We can use it to describe both lucky and unlucky situations.

Example: “As luck would have it, my sister bought me my favourite book”

Example: “As luck would have it, the shop I needed to go to was closed”

The expression to “push your luck” means to expect continued good fortune; to expect to continue to escape bad luck.

Example: “Don’t push your luck; you asked for a higher salary two months ago already”

2013-12-20
Share
Previous Learn English with the News: “A giant Christmas cake!”
Next Christmas dinners all over the world!