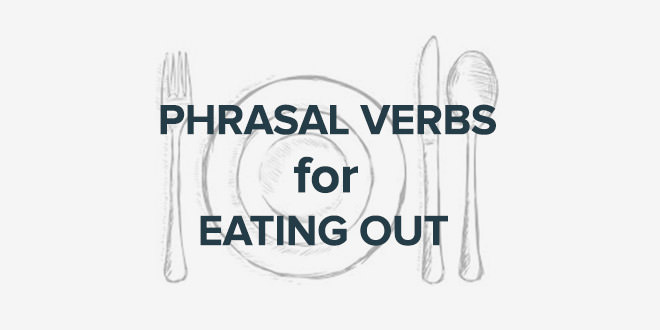 Everyone loves eating out, right? But not everyone is as lucky as Tim Jacobs, because Tim gets to eat out four times a week, and judge the food’s appearance and flavour! Let’s look at the following text describing Tim’s job and make sure to notice the “phrasal verbs” used to describe certain actions in the restaurant scene.

See if you can understand their meaning before looking at the answers down below.

Tim Jacobs is New York’s hottest food critic. He certainly has made a name for himself mostly on his stringent method of judging restaurants and small eateries. Tim is different from other critics in that his approach is based on a set of personal rules he follows once entering a restaurant and sitting down , from how long food is cooking away in the kitchen to how long it takes the chef to chop up his vegetables and meats. Tim eats out 4 times a week in different restaurants based in New York. He locals little diners for a simple fry as well as five star restaurants where he judges on the final plate up and especially the service offered. Tim tells us that even though the food looks and tastes great in many places, he is not able to just tuck into his food as he needs to sample and savour each ingredient before deciding on the quality of the food.

So, for all those chefs who would like to have great reviews for their restaurants published in the paper and to have their guests splash out for a meal,be careful to not let your food boil over in the pot. Make sure you peel off the non eadible bits of skin from vegetables with precision. Slice up the cuts of meat as if you were serving royalty, because you never know when Tim Jacobs might be watching.

So, what is Tim’s job? Exactly, he’s a food critic. A critic is a person who gives opinions about books, movies, or other forms of art, and in Tim’s case, he critiques food.

Now let’s learn more about the phrasal verbs we found in the text above.

Eat out – this phrasal verb means to dine at a restaurant rather than at home.

Cook away – slow cooking; to cook slowly over a long period of time.

Chop up – to cut into small pieces.

Plate up – to put food on a plate ready to be served.

Splash out – to spend money freely on something

Boil over – when liquid in a pot starts to come out over the top.

Peel off – to remove the skin from a vegetable or fruit.

Slice up – to cut something into slices.

For more phrasal verbs, check out our Phrasal Verbs about Food post. There is an exercise involved to help you learn and remember extra English vocabulary.

I just learnt new phrasal verbs to use when I am eating out! Thanks @abaenglish 🙂

2015-02-02
Share
Previous The difference between mistake and error – SayWhat?! Episode 10
Next Idioms of the World – Italy