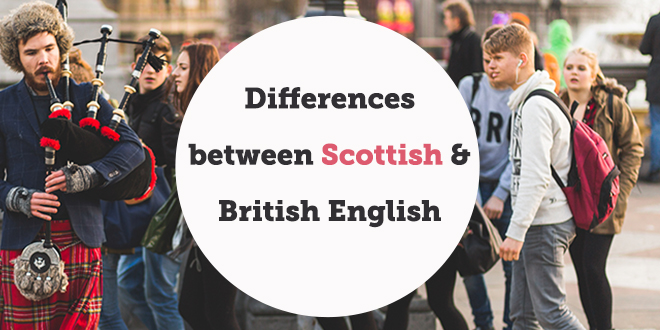 Differences Between Scottish and Standardised English

We all know that English can be tricky at the best of times, but have you ever stopped to think about just how different English speaking accents are, especially in the relatively small United Kingdom? There are many accents on the British Isles alone, many of which are similar to what is deemed to be “standard English”, however the Scottish accent is very different and today we are going to have a look at some of the linguistic differences to see what makes Scottish English more complicated.

As for standardised British English, there are long and short vowel sounds whereas this tends not to be the case in Scottish English where we have fewer vowel sounds.

In a standardised version of British English these two words would be pronounced differently with the first having a long vowel sound and the second maintaining a short sound. In Scottish English, these two words sound exactly the same as we do not tend to distinguish between long and short vowel sounds.

Just as there is a clear difference in some of the vowel sounds between standard British English and Scottish English, there is also a big difference with how an “r” is pronounced.

In standard English, the “r” in the examples above would almost vanish and not be pronounced, but the same cannot be said for the “r” in Scottish English. North of Hadrian’s Wall, the “r” is almost always pronounced and is sometimes almost likened to the “r” sound in Spanish. In other words, it is a much stronger sound than in standardised English.

Unlike standard English where the personal pronoun “you” is used in both singular and plural, this is not the case in the majority of Scotland where the personal pronoun “yous” is used as the plural. This can seem incorrect as in English a plural second person personal pronoun does not exist but this is linked to whether “Scots” is a dialect of English or an official language in its own right which just bears striking resemblances in both written and spoken English. Many have argued that it is more than a dialect but not quite reaching a fully fledged language.

Have yous finished your homework?
Are yous okay?
Yous won’t believe what I’m going to say.

Can you tell us the news?
He didn’t give us money when I asked him.

In these examples it can be slightly confusing as most people associate “us” with the first person plural, not singular. It is important to keep in mind that this only refers to Scotland and in some cases the very north of England. The location use of this point is being stressed due to the fact that if this were to be used by someone in an area where it is not common, it could be misunderstood or sound strange.

So, what should you do if you don’t understand English in Scotland?

It’s very probable that if you go to Scotland for a holiday or to study, you will encounter some problems understanding at the beginning due to the accent being difficult, but there are ways around this. The first way and most obvious would be to ask someone to repeat something in a more slow way. This first step also alerts someone to enunciate better and in a more neutral voice as they will have understood that you have found their accent tough; Scottish people are aware that their accent can be somewhat challenging. Just remember to never give up.

If you’d like to continue learning English, sign up to our course! It’s completely free and you will be able to access all of our 144 grammar video classes and the first complete unit of every level from the very beginning.

ABA English aba online free english course British English difference between Scottish and English free english blog freen online blog Scottish English Standard English 2016-11-24
Share
Previous Questions with “must” and “have to”
Next Help! How Can I Improve on the TOEFL?