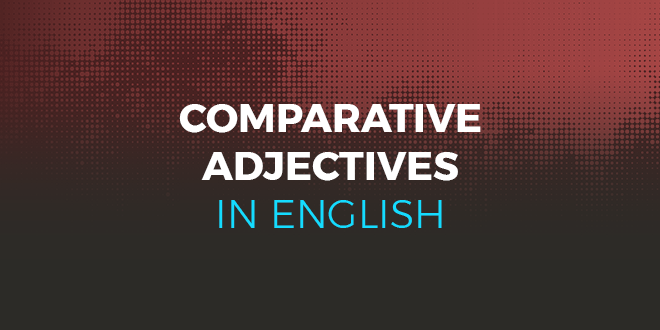 It’s that time again where we get the opportunity to improve our English that bit more with our weekly grammar post. Today we are going to look at comparative adjectives in English and how they are both formed and used.

Jane is taller than Claire.

One-syllable adjectives and their comparative form:

Two or more syllable adjectives and their comparatives.

When adjectives have 2 syllables in English, the general rule for making the comparative form is to change the “y” to and “i” and add “er”.

When adjectives have 2 syllables in English, the general rule for making the comparative form is to…

When we want to create the comparative form of adjectives that have two or more syllables and don’t end with the letter “y”, we cannot add “er” but instead use the adverb “more” before before the adjective.

Remember that if we wish to express the idea of not so much, then we need to use the adverb “less”.

My car is more comfortable than your car.

Your car is less comfortable than my car.

Football is more dangerous than tennis.

Tennis is less dangerous than football.

Adjectives which have irregular comparatives

As we all know, nothing is ever straight-forward. There is always an exception or irregularity along the way and comparative adjectives are no different. The 3 adjectives which have irregular comparatives are: good, bad and far.

Adjectives with their irregular comparatives:

My English is better than my French.

The weather in England is worse than in Spain.

Your house is farther from Frankfurt than mine.

Bear in mind that “farther” and “further” mean the same when we are talking about distance but only “further” can be used if we are asking someone for additional information.

If you would like any more information on comparative adjectives in English, you can check out unit 80 of the complete ABA online course. Remember that studying for 20 minutes daily is better than 3 hours once a week. If you stay focused you will improve your English and see the results very quickly.

If you are serious about continuing with English then sign up for your free trial of the ABA English course and start improving your English today.