Legos are a fun toy many people associate with childhood. You can build almost anything with Legos. Most recently, Brazil has successfully erected the world’s largest Lego tower! Sao Paulo is now home to a tower composedof 500,000 Lego pieces and reaches 102 feet and 3 inches. Chile previously held the title for having the largest Lego tower.

Have a look at the following video, originally by the British newspaper The Telegraph discussing the huge Lego tower with English subtitles.

Do you think this tower is a remarkable feat or a waste of time? 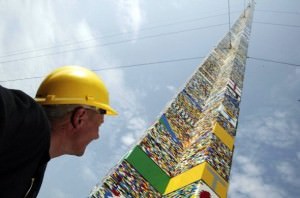 Childhood – (noun) the period of time when a person is a child.

Erected – (verb) to build (something) by putting together materials.

Composed – (verb) to come together to form or make (something).

Reaches – (verb) to be able to touch, pick up, or grab (something) by moving or stretching [+ obj].

Previously – (adverb) existing or happening before the present time.

Feat – an act or achievement that shows courage, strength, or skill.

2011-04-12
Share
Previous What do you have for breakfast?
Next Introducing New Practice Units!