Today we are going to remember the difference between say and tell.

So how do you know when to use them? It’s easy:

Tell is followed by an object noun or pronoun (Can you tell me who is right, please?)

1. We sometimes use “to someone” after we use say, for example:

“I said to him he was welcome to my birthday party but he said to me that he was busy, so I said to him that he could come later if he wanted to”

2. We use say with direct speech, for example:

Paul said, “Hi Julia! How are you?”
Julia said, “Well, I’m having a birthday party tomorrow, would you like to come?”
Paul said, “I’m working tomorrow”
Julia said, “Oh, well you can come later if you want to”

– Susan said she was tired.
– Anthony says you found a new job. Congratulations!
– James came to my house yesterday and said he loved me.

1. We follow tell with a personal object, for example:

“I told everyone it was time to go home”

2. We use tell for orders and advice using the structure: tell + object + infinitive, for example:

3. There are some fixed phrases we always use tell with, not say.

– Tania told Charlie, “Turn off the TV now, I have to study”
– David told me that he found a new flat.
– Could you tell me what time it is?

Complete these sentences with say or tell. 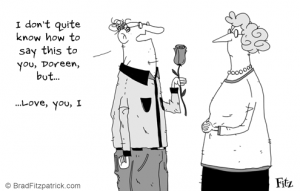