American or British English on the TOEFL

If you are going to apply to a U.S. school but you are not a native English speaker, then you are probably going to take the TOEFL. There are many schools that accept other tests, but still, most applicants to American schools who speak English as a second or other language will take the TOEFL.

At the same time, English learners in some parts of the world, including India and Europe, might not use American English. It’s likely that your education and practice are based on British English instead.

If both those things are true—that you’re going to take the TOEFL and that you are more comfortable with British English—then you might be a little bit worried about the TOEFL. Because it’s an American test, do you have to use American English?

You do not need to use American English to get a high score on the TOEFL. Ideally, during the TOEFL speaking section and writing section, you should not change between American and British English (or other types of English). But that’s just for consistency. If you use British vocabulary and spelling and speak with a British accent, then don’t worry about using American English. If you try to switch, your language will just be confusing to the listener or reader. Use one or the other; don’t mix.

But even if you do switch a bit, it is not extremely important. It’s more important that you are using correct English words and grammar so that you are understandable to an English-speaking audience. If you communicate well, then you’re on the right track!

And the people you hear speak will not all be American. They will mostly be American, yes, but you will hear a lecture or two from a British English speaker or possibly an Australian. Don’t worry—the accent won’t be very strong. You won’t hear any extreme Scottish accents, for instance, which even native-English-speaking Americans can have serious difficulty with.

But you should be familiar with some different accents. It helps if you have listened to British and American speakers quite a lot.

This post was written by Lucas Fink, resident TOEFL expert at Magoosh. For more advice on TOEFL prep, check out Magoosh’s TOEFL blog. 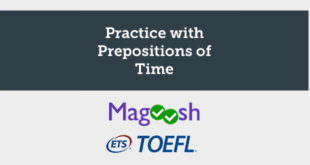 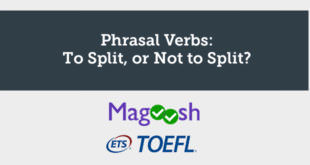 Phrasal Verbs: To Split, or Not to Split?