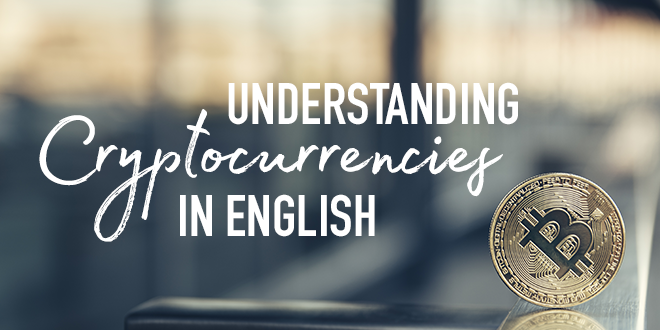 6 Things to Know About Cryptocurrencies

Cryptocurrency is a system of money not tied to any government or organization. It’s Internet money. Some people say that someday we’ll all be using cryptocurrency instead of our current money systems, but others say it’s just a flash in the pan that will go away.

Cryptocurrencies are complicated, and even native English speakers have trouble understanding explanations of them. Here at ABA English, we know you want to learn about cryptocurrency, so we’ve compiled a list of the most important things to know without all the confusing words. Let’s get started.

1. There Are Hundreds of Cryptocurrencies

Although most people have only heard of Bitcoin, over 1000 cryptocurrencies have been created since 2009. But it’s impossible to know exactly how many exist because anyone could make a cryptocurrency if they knew how to.

Over the years, many cryptocurrency systems have been abandoned. Once, a cryptocurrency used American rapper Kanye West’s name in its name and Kanye’s face in its logo. Kanye’s lawyers demanded that the cryptocurrency (called Coinye West) stop, and Coinye became inactive.

2. You Get It By Exchanging Normal Money Or By “Mining”

You can exchange your money for cryptocurrency just like you would exchange dollars for euros, but the way to initially get cryptocurrency is through a process called “mining.”

3. You Use It Pretty Much Just Like Normal Money

When you get cryptocurrency, you also get two “keys” to that specific system of cryptocurrency. The keys are a series of numbers and letters. One is a private key that you need to keep secret. The other is a public key that you use to make payments, like a credit card number, but it isn’t secret. You store your keys in one of these kids of “wallets”:

You can buy anything that anyone is selling using cryptocurrency just like you can use normal money to buy things online.

When you buy something with cryptocurrency, your transaction is added to a list with every other transaction that uses that cryptocurrency. Names of people and businesses are not included on this list. Miners must approve or verify transactions to make sure that you have the money you say you have and you haven’t already sent that money to someone else at the same time.

4. You Use It Because It’s Less Restrictive Than Normal Money

Cryptocurrencies were created partly so that people could be entirely in charge of their money. For example, a bank can freeze an account containing your normal money or a government can seize your funds. Those things are difficult with cryptocurrency. Cryptocurrency is also very private, which people like. When you spend cryptocurrency, nobody can see your name or account information.

Additionally, people like cryptocurrency because there are little to no transaction fees and because anyone who has access to the Internet can use the currency, even if banks are far away or corrupt.

People also use cryptocurrency on what’s called the “darknet market,” a corner of the Internet where you can buy illegal drugs, weapons, counterfeit money, and other bad stuff. Due to the fact that cryptocurrencies are untraceable, they’ve become a hotbed for illicit activity.

5. Most Cryptocurrencies Artificially Limit How Much Exists

Theoretically, there could be an infinite amount of any cryptocurrency, just like how a government could print any amount of money it wants.

But just like how a government wants to limit how much money it prints in order to make the money that exists more valuable, many makers of cryptocurrencies eventually provide less of the currency. Just like normal money, cryptocurrency is less valuable if there’s too much of it.

6. You’ve Got To Be Careful With Cryptocurrency

Those safeguards don’t exist with cryptocurrency. Once a payment is initiated, it can’t be stopped. And because transactions are secret, there’s no way to get your cryptocurrency back after you’ve sent it.

Also, because cryptocurrency isn’t tied to any governing body, the market is very unstable. Normal currency exchange rates change a little each day, but cryptocurrencies can change in value by huge amounts every day or even every hour.

Lastly, some governments regulate cryptocurrencies, but so check out the laws in your region if you’re interested. Keep in mind that cryptocurrency is still very new, and laws are changing a lot to adapt.

If you really look into it, cryptocurrency gets a lot more complicated than what we’ve laid out here. If you feel ready, check out these websites to learn more:

If you need to learn more English to understand cryptocurrency, we understand and we’re here to help. ABA English is a great resource for anyone learning English, whether you’re just getting started or whether you need to brush up after years of study in an academy. We offer online English lessons that you can do on your own time, along with real teachers that you can talk to and ask questions.

The best part is you can get started for free, so you can save your money, exchange it for cryptocurrency, and join this exciting market!