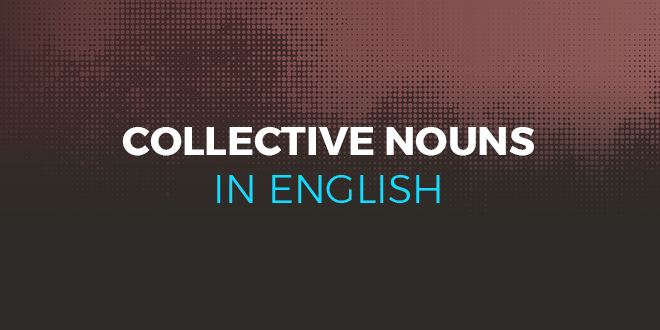 Check out collective nouns in English with @ABAEnglish.

If in American English the verb is in singular, in British English, these nouns may require the verb in both singular and plural. Let’s look at the rules that must be considered so as not to make mistakes.

We must pay close attention to the verb. Even English speakers learn to conjugate the verb correctly only through time and with a lot of practice. For us, foreign language speakers then, errors could be made due to differences with our native tongue. Here we will present the general rules.

The class started their exam at 10 am.

The class were reading books in the library with their teacher.

The police were very effective.

The macaroni was excellent.

Her hair is really beautiful and shiny.

The Structure of the Collective Noun + Of

Some collective nouns are accompanied by the preposition ‘of’ and the noun for the people, animals, plants, and things which they name. The peculiarity of the English language lies, however, in the variety of these nouns and also, sometimes, in their extravagance. Some nouns can be used to name groups of people, as well as animals, plants, or things.

Plants and Other Things

There are some collective nouns that, as we have mentioned, are really particular and imaginative. In the case of English, this is for two main reasons: on the one hand, the influence of French, which has inspired many English nobles to coin some evocative terms; on the other, the desire to refer to the outstanding qualities of the group, such as behaviour or appearance. The result has been, in some cases, really effective. Let’s look at some of the collective nouns that deserve a special mention. Try to find the reason behind the minting of these expressions.

These are just some examples of the many collective nouns in English. If you love English, why don’t you try our online course? ABA English offers 144 grammar video classes and an equal number of short films to learn English using an intuitive method. What are you waiting for? Try one of our video classes today!

OK, I want to see a video class!
OK, I want to try the course!
2018-08-28
Share
Previous Five English YouTubers That You Should Not Miss
Next Movies and Series to Learn English