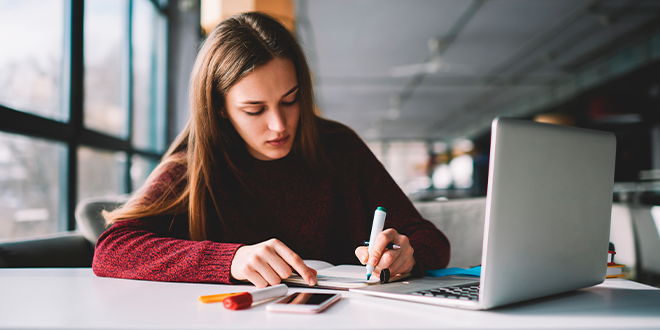 What are phrasal verbs? Also known as compound verbs, these are those verbs that change their meaning when accompanied by an adverb or preposition. This makes it inconvenient to translate them literally.

If you want to speak English like a native, you must learn a lot of phrasal verbs. They’re an inescapable component of English that will enhance your communication skills.

In this article, we invite you to discover our list of the 25 phrasal verbs that are used most often in English. You’re getting so close to your goal of becoming an expert in the language of Shakespeare!

This refers to the action of adding.

We added up the apples. There were 12.

We can also use it to mention that something is meaningful, logical, and makes sense.

Her story doesn’t add up. I think she’s lying.

Little by little, you’ll realise that phrasal verbs enrich the semantics of English exponentially. Each one can have different meanings and uses depending on the context.

Blow up means “explode”, like a bomb, for example. Someone’s temper can also “explode”, meaning that they become quite angry. A third meaning is “to inflate” or “to fill something with air”, like a balloon.

Could you please blow up those balloons?

The building was blown up by a bomb.

When I said I couldn’t go to her party, she blew up.

This means “to nurture”, “to raise”, or “to teach” a child. It implies accompaniment, care, and protection from the earliest stages of life.

Their grandparents brought them up because their parents were always travelling.

It’s also used when someone wants to bring up an event, memory, or comment from the past. This usually happens a lot in marriages, when one spouse makes a criticism, for example:

Do you recall that the words ON/OFF are used for light switches? When off accompanies a verb, it will give that connotation of “reject” or “turn off” to the verb that precedes it.

For example, call off means “to stop doing” or “to stop planning” something.

Maria called off the wedding. She decided she didn’t love him.

We also use it to suggest a person control their animal to stop it from attacking something.

Call off your dog! He’s attacking my cat.

Adding on to a verb gives you a sense of continuity or permanence in time.

Sorry I interrupted, carry on talking…

The little boy was carrying on, shouting and kicking all day long.

You can use this compound verb when you perceive something in particular from a person or situation.

Julia came across as a bit bossy.

It’s also used when you meet someone by chance or by coincidence. Even though it’s been said that nothing in life happens by chance…

Luis was leaving the fruit shop when he came across Tom. What a coincidence!

This is a verb that you might use a lot, especially if you are studying mathematics or trying to build a chair. Come up with means “to find a solution”. What a relief!

We finally came up with a solution to the problem!

This verb, unlike the previous one, can be used in situations that could be somewhat disappointing. For example, to mention that something has broken, or worse, that a life project, such as a marriage, has dissolved.

My cake fell apart when I tried to cut it.

After the divorce, she fell apart.

Discover the 25 most important phrasal verbs in English.

Wow! This phrasal verb can really mean many different things. Have you ever met someone and felt that immediate connection? That’s the first use of this verb:

We’re not together anymore, but we get along great.

The second meaning is “to progress”:

How are you getting along at playing the guitar?

You can also use it to say, in a very diplomatic and decent way, that you’ve got to leave.

It was lovely to see you, but my friend has to get along. She has a class.

Finally, it means that someone’s getting older.

Her grandma is getting along. She’s almost 99.

The word away implies leaving or a distance. We can use get away to say that we want to go out, flee, or even in a symbolic sense, escape the consequences of something.

I can’t wait to get away from the city.

The thieves managed to get away in a stolen car.

Yvonne is always lying. I can’t understand how she gets away with it.

The word over suggests being above something. For example, when you’re being supportive and tell a friend, “Hey, get over it. Everything will be fine.”

So, get over can be “to overcome a fear”, “to stop worrying about something”, or “to recover from illness”.

I got over my fear of flying.

Kylie finally got over her ex-boyfriend.

Have you heard? Dave has gotten over the flu.

This verb can have two interpretations: to throw in the towel or to abandon something.

It’s not always good to surrender in life, we must continue fighting until we achieve our goals.

If you’re talking about a vice, though, it’s quite the opposite. In this case, giving up is the best option.

We all gave up smoking on January 1st.

Do you remember when Celine Dion sang “My Heart Will Go On” in Titanic? That is, my heart will continue, it won’t give up.

This also happens when someone is telling you something and you encourage them to continue talking and say, “Go on, go on.”

They landed in Paris and then went on to Montpellier.

Go on! Try it, it’s delicious.

This verb suggests clinging to or holding something for a long time.

Hold on to the railing, that way you won’t fall.

I’ll hold on to my job until May.

This is often used in hospitals or nurseries. It means “to care for”.

The nurse looked after the patient for months until he was better.

When something excites you and you can’t find the time to do it, you use this verb. If you’re overworked, you can’t wait to go to the beach or to a five-star hotel. What a treat!

William is really looking forward to going on holiday.

You can use this to mention that something is improving. It’s also used to say that you’re looking for something in the dictionary or on Google, for example.

The economy is finally looking up.

Let’s look up his number in the yellow pages.

Make out isn’t just kissing your partner romantically. It can also be writing a cheque or trying to understand what someone is saying.

Have you ever watched a movie in English and couldn’t understand a single word? Well, that’s completely normal. Keep practicing and eventually, you’ll be able to make out more vocabulary.

Who shall I make the cheque out to?

I can’t make out what you’re saying. Can you speak louder?

We made out in the back of his car.

Have you ever fainted? This can happen if you neglect your diet, exercise excessively, or even have a major scare.

Losing consciousness isn’t a fun experience, but if it happens to you in an English-speaking country, at least you’ll know how to explain to the doctor what’s happened.

It also means “to deliver” things like merchandise or products.

Lisa was so tired that she got home and passed out on the sofa.

I passed out leaflets with information on our course.

This scene is often repeated in films: a police officer is following a suspicious vehicle that has exceeded the speed limit. Incidentally, the driver has no documents or has something hidden in the trunk of their car. The police officer yells “Pull over!” meaning to stop the vehicle on the side of the road.

Does the police officer uncover what’s hidden in the vehicle? Wait for the next episode to find out.

That looks like a lovely restaurant. Can you pull the car over and park?

If the scene from the previous film gets complicated, the suspect may try to pull out a gun. What might the police officer say? “Put that down!”

You can put the suitcases down in the bedroom.

He put down his memories to write a book when he was older.

My husband and I are going to put down some money to buy that house downtown.

It may also be used when you euthanise an animal, especially at the vet.

Jessica had to have her rabbit put down. It was very sick.

One of our main defects can definitely be that of procrastination. Put off means “to cancel” or “to postpone”.

Another meaning is to discourage or make you not want something.

Graham was so tired he put the shopping off until next week.

You’re putting me off my food. Stop talking about insects!

There are sometimes unbearable situations or people who drive us crazy and test our resilience like city traffic, obnoxious people, or a fly in your soup.

You decide how far you can put up with these things, that is, if you tolerate or resist them. The important thing is that you don’t lose your temper or lose control.

My mother won’t put up with my sisters or me swearing.

There is a party starting in your home. What’s the first thing you do? Turn up the volume.

Then a person appears that you haven’t seen for a long time. She turned up at the party.

We can also use it to mention that we found something after an exhaustive search…which is usually the TV remote control.

Oh! My phone turned up in my bed!

As always, Julian turned up late.

Please turn the music up, I love this song!

We can use this compound verb to warn someone of a danger on the spot.

For example, if there’s a gap in the road or something is falling, you can simply say, “Watch out!” You can also warn someone using a more elaborate sentence like:

Watch out in the mountains; there are bears there!

That’s enough, right? These are only a small fraction of all the phrasal verbs that exist in English. By learning and improving your phrasal verbs, you’ll become a student with effective and efficient communication.

Remember you can’t interpret phrasal verbs literally, but you can use either the context or a dictionary to deduce what they mean.

We hope that you’ve learned a lot. If you want to improve your English, follow our journal, download the app, or sign up for our online English course.