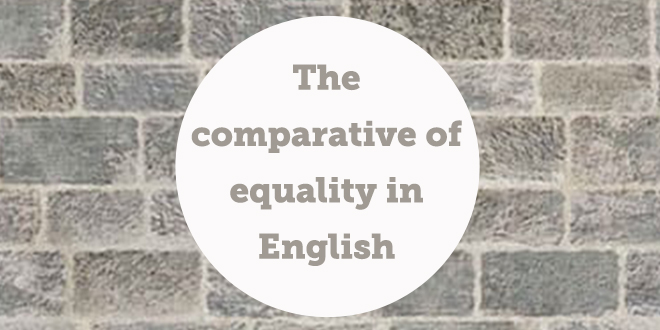 The comparative of equality in English

Today we have an interesting post for you that will enable you to make comparisons of two things in English explaining that something is the same or not the same as something else or that it varies from something else.

How do comparatives work?

In English when we want to compare two things, we tend to use the “as … as” structure or to simplify it more “as + adjective + as” in order to say that two things are the same.

Are you as fast as your brother?

In the mountain, I felt as free as a bird.

When I saw him he was as tall as his brother.

This structure as well as being used in the affirmative can also be used in the negative to express that two things are not the same.

Comparatives with “the … the” structure

This structure in theory is similar to the “as…as” in terms of the way the words are put together but in this case we use the definite article “the” instead of “as”. This is used to express that things change or vary together.

Examples with “the more” and “the less”

The more I know you, the more I like you.

The more I water the flowers, the less beautiful they are.

As is mentioned in unit 80 of the course, we form the comparative of one-syllable adjectives by adding “-er”. In other words, shorts changes to shorter.

Henry is shorter than his father.

The Atlantic is warmer than the Arctic.

London is safer than New York.

The jumbo is slower than the concorde.

The Pyrenees are lower than the Himalayas.

The film wasn’t as good as the book.

Henry isn’t as tall as his father,

The more I practise English, the fewer mistakes I make.

The more I see her, the more I like her.

The more water I drink, the healthier I get.

The more I work, the less time I have to be with my children.

The more I play tennis, the better I feel.

At ABA we sure hope that this blog post has been as useful for you as you hoped. Remember to keep on practising to keep on improving.

I learnt about comparatives in English with @abaenglish