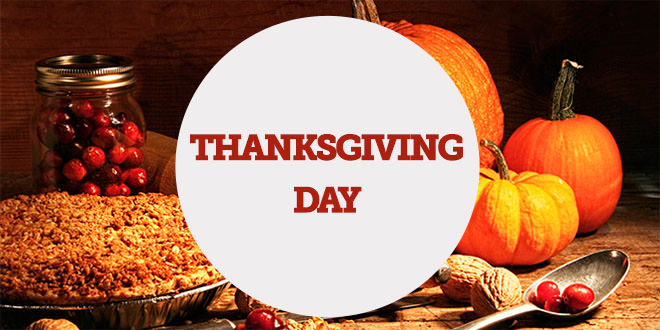 Let’s talk about an upcoming celebration: Thanksgiving (A day of giving thanks), which is one of the most popular holidays in the US and Canada.

It also marks the beginning of the holiday season, the weeks leading up to Christmas, Hanukah, Kwanza and the winter solstice, which are some of the most popular and well-loved celebrations in the US.

The arrival of Thanksgiving marks a very exciting and busy time for shopkeepers and small businesses.

This holiday is held on the fourth Thursday in November in the US and was established in 1863 by one of the most popular presidents in history: Abraham Lincoln.

In Canada, however, it is celebrated on the second Monday of October and became official about 100 years later, in 1957.

On Thanksgiving, family and friends gather around the table for a big feast consisting of a wide variety of foods. The main traditional dish is turkey and some popular side dishes are sweet potatoes, zucchini, pumpkin pie, cranberry and other foods (usually produced in the month of October).

Nowadays, the feast preserves the roots of its ancestor pilgrims who came from Europe and shared with the Amerindians. As the name suggests, “Thanksgiving” is the association of the word “Thanks” with “giving” because the pilgrims from Europe who settled in North America wanted to thank the Native American Indians for teaching them how to fish, hunt, farm, harvest and produce their own food. It is said that this celebration lasted a full three days!

Another interesting aspect of this holiday is the tradition of watching football during the Thanksgiving celebrations in the United States. Many families gather in the kitchen and watch sports on TV together while cooking and helping prepare the meal.

As you can see, it is a celebration that incorporates many different activities in which the whole family can participate by contributing something.

What is your favorite holiday and why? Write to us in the comments section (In English)

Shopkeepers: People who own or work in shops to sell products

Pilgrims: Travelers who are one on a journey of some sort, normally with a destination in mind.

Harvest: The process of gathering ripe crops at the beginning or end of a season

Squash: a vegetable of herbaceous vine in the gourd family, Cucurbitaceae, also known as cucurbits, native to the Andes and Mesoamerica.

Turkey: a large bird native to the Americas.

Pumpkin pie: a traditional sweet dessert usually eaten in colder months in the US and Canada.

If you would like to know more, here’s the story well told in English from children’s point of view.

And make sure to check our ideas on Pinterest for this amazing day!

Do you want to read more posts like this? Yes I do!