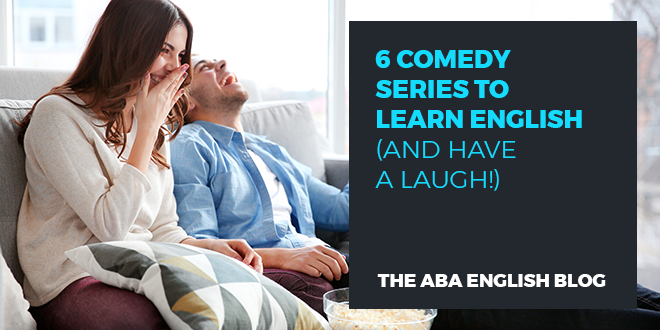 Have you ever thought about improving your English by watching TV? In fact, this is an excellent and fun way to improve your understanding of the language, improve your pronunciation, and enrich your vocabulary.

Unlike a movie or a cartoon, a television series develops its plot over several episodes. This offers you an additional incentive to persevere and practice continuously. In fact, television series are often fun and attractive enough to motivate you to watch the next episode. They also help you get used to the pronunciation and accents of the characters, improving your understanding episode after episode. Last but not least, the knowledge you acquire about the situations and the characters will give you the opportunity to make inferences (logical deductions) that will allow you to understand the dialogues, even if the meaning of some words escape you.

Discover the six television series to help you learn English that @abaenglish has chosen for you.

To take full advantage of this useful teaching tool, follow the suggestions that we have given you below.

Here we present six very funny TV series that we have chosen for you.

This American series begins with the arrival of Jess, a clumsy but nice girl, in the house and the lives of three boys. Despite the somewhat problematic beginnings of their cohabitation, with time the boys become very fond of Jess and her best friend Cece. They become an inseparable group of friends who share with us their points of view about life, love, and friendship. The episodes are quite short, only about 20 minutes, so this is a great series for beginners who want to improve their understanding of American English.

The Pritchetts are what we might call an extended family. Jay, the father, married a much younger Colombian woman with whom he has a son, Joe. However, in a previous marriage, he had two other children, Claire and Mitchell. Claire is a slightly neurotic career woman, married with children, while Mitchell is a declared homosexual and lives with his partner, Cameron. When a television crew starts filming a documentary about family relationships, the three families agree to talk about their daily lives and their emotional relationships. Modern Family is an exciting comedy that offers you a vision of the contemporary American family and offers very comic moments. It is no coincidence that in 2009 TIME chose it as “the funniest comedy of the year.”

Desna runs a beauty salon and has four employees, including Jennifer, her best friend. Each of them must face challenges and difficulties of various kinds. When Roller, Desna’s boyfriend and her boss, decides to exploit the salon to launder money, the women have to deal with the sexist and ruthless world of organized crime.

Jack Whitehall: Travels With My Father

Jack begins the journey of his life through Southeast Asia with his father Michael in an attempt to rebuild their relationship. While crossing through countries such as Thailand, Vietnam, and Cambodia, the two will have several adventures and misadventures that will reveal their different perspectives and approaches to life.

On September 28, 2018, Netflix launched the second season that shows the two traveling through Eastern Europe. If you love to travel and want to improve your understanding of the British accent, this series is perfect for you.

The technology department was relegated to the dirty and messy basement of the building by the London-based Reynholm company. The new manager, Jen, is forced to handle two rather strange employees, Roy and Moss, who are brilliant with computers but absolutely unprepared for relationships with others and, in particular, with women. The staff spends the day on their computers, ignoring the telephone or using cassettes with computer recordings of instruction as answering machines. The IT Crowd, produced in the UK from 2006 to 2013, is a cult hit in its genre and will help you become acquainted with the London accent.

35-year-old Miranda is a very tall, young British woman of a robust constitution that people often confuse with a man. She is clumsy, not very attractive, and a little uncomfortable in social situations, but deep down she is intelligent and sensitive. Together with a childhood friend, she runs a gift shop and spends her free time with her friends and her mother, who would like her to marry and find a more stimulating job. Over the course of the series, you will fall in love with Gary Preston, the charming chef from the restaurant next door. After a series of daily adventures with a comic effect, Miranda will learn how to overcome her fears and how to ensure a happy ending.

Watching television series in English is certainly very useful but in itself, does not guarantee adequate language learning. If you want to improve your English, the best thing to do is to accompany watching the television series with a good study method and an organized course. That is why ABA English offers you a complete course with 144 grammar video classes and the same number of short films based on situations taken from daily life.

OK, I want to try the course!
OK, I’m going to download the app!
2018-11-27
Share
Previous Humour in English: British or American?
Next Learn English With Sabrina, the Teenage Witch