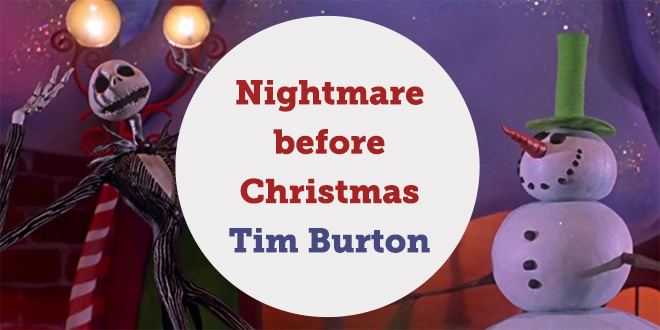 Learn with Videos – The Nightmare before Christmas

Today we want to share a brilliant poem with you all. Have you heard of Tim Burton?
He is a very well-known American film director, producer, artist, writer, and animator. His works are known for being quite gothic and macabre. He also has a bizarre sense of humour.

So, are you ready to learn some English? Awesome!

It’s quite a long poem but we highly recommend it because it’s a classic and you will certainly learn a lot of English. Since it’s a long reading, this time we’ll start by watching the video.

A skeleton – the structure of bones that supports the human body

A glance – a quick look at someone or something

A graveyard – a place where the dead are buried

To whimper – to make a quiet crying sound

To whine – to moan or complain

Spectral – ghostly or related to ghosts

A doorway – the entrance of a door

To carve – to make a shape out of something, for example, wood or marble, by cutting pieces out of it

Awe – a feeling of reverential respect mixed with fear or wonder

Entranced – filled with wonder and delight

A flurry – a flurry of snow is a small amount of snow that suddenly appears for a short time and moves in a quick, swirling way

Haunted – lived in or visited by ghosts

To sparkle – to produce small flashes of light

To spread – to place things over a large area

Outraged – very angry about something

A din – a confusing mixture of noises

A mastermind – a person who plans or organises something important

To gather – to join or come together

To gaze at – to stare at something

A coffin – a wooden box that is used during burials

To creak – to make a long, high sound; to make a sound like the sound made by an old door when it opens or closes

Macabre – involving death or violence in a strange, frightening way

Sleek – straight and smooth by design

Ghostly – of or related to ghosts

A nightmare –  a dream that frightens a sleeping person; a very bad dream

Twas – In literature, the abbreviation of “it was”

A scare – a fright

A sleigh – a large, open vehicle that is usually pulled by reindeer over snow or ice

To skip – to jump or move quickly over something

A tentacle – one of the long, flexible arms of an animal (such as an octopus) that are used for grabbing things and moving

To wield – to carry and use a weapon

A commotion – noise and confusion

To wreak havoc – to cause destruction and confusion

To bid someone goodbye – to say goodbye to someone