Learn English with the News: “The world’s smallest movie”

Everyone enjoys a good movie, right? Popcorn or sweets, on the sofa or in bed, alone, with your partner or friends, at the cinema on a weekday or relaxed at home on a weekend. Whether you like scary films, happy films, thrillers, comedies or drama, there’s a film out there for all of us.

Well, the movie (remember in the US they say movie, in the UK it’s film) we will talk about today is so small, no human being would be able to see it.

It’s the smallest movie ever made. To make it visible to the human eye, the movie had to be magnified 100 million times by its creators at IBM.

“A Boy and his Atom” is a story about a character named Atom and his adventures with a new atom friend. The movie features thousands of precisely placed atoms to create nearly 250 frames of stop-motion action. Using IBM’s Scanning Tunneling Microscope, the researchers controlled a super-sharp needle along a copper surface to attract the atoms into position for each frame of video.

And while the movie is tiny, IBM says it will hopefully make GIANT strides in educating the public about atoms and the importance of nanoscale research. 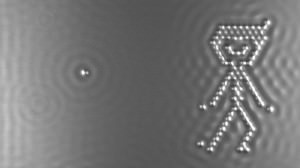 Magnified – to make (something) greater.

Character  – a person who appears in a story, book, play, movie, or television show.

Frames – one of the pictures in the series of pictures that make up a film.

Needle – a small, very thin object that is used in sewing and that has a sharp point at one end and a hole for thread.

Copper – a reddish-brown metal that allows heat and electricity to pass through it easily.

Strides – a change or improvement that brings someone closer to a goal.

2013-05-21
Share
Previous How to Invent a Language
Next How to remember prepositions!