Learn English with the News: “Rollercoaster of love”

Proposing to your girlfriend – or boyfriend – is a big step for most couples. Getting married is, as well. Every day we hear new stories of exotic proposals and wedding, but we’d never heard of a rollercoaster marriage before!

Theme park sweethearts Takumi Hashimoto and Azumi Matsuzawa are about to take their relationship to the next level – 141 feet in the air on the world’s steepest rollercoaster in Japan. The newlyweds tied the knot last year, but Hashimoto said he never got around to proposing.

– I actually haven’t proposed properly yet, but I’ve been waiting for this opportunity and today I will do it there.

Ready to take the plunge, the park employee lovebirds agreed to take on the twists and turns of marriage…and the 1,004 meter track.

– Oh dear, I think I’m going to die… Azumi! I apologize for making you wait so long for me to pop the question, but will you marry me?

Fujikyu Highland park at the base of Mount Fuji recently launched a campaign to offer rollercoaster weddings. The couple was the first to sign-up for the high-speed thrill.

– Both (the proposal and the rollercoaster) scared me, but I think that the Takabisha rollercoaster frightened me more.

The couple endured the 160 second ride which reaches speeds of up to 100 kilometers per hour, but here’s hoping that their marriage lasts a lifetime. 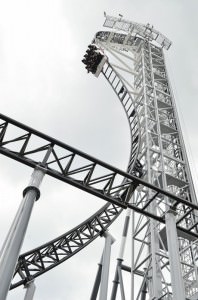 Theme park – an amusement park where the rides and attractions are based on a particular theme .

Sweethearts – a person you love very much.

Steepest – almost straight up and down : rising or falling very sharply.

Rollercoaster – a ride at an amusement park which is like a small, open train with tracks that are high off the ground and that have sharp curves and steep hills.

Newlyweds – a person who has recently married.

Proposing – to suggest (something, such as a plan or theory) to a person or group of people to consider. In this case it means to ask someone to marry you; it’s a marriage proposal.

Take the plunge – to do something after thinking about it especially for a long time.

Pop the question – to ask someone to marry you.

Launched – to offer or sell (something) for the first time.

Thrill – a feeling of great excitement or happiness.

Endured – to deal with or accept (something unpleasant).

It reminds me of another wedding proposal we wrote about on the ABA Blog. Check out this romantic proposal.