As you know, yesterday we celebrated the Chinese New Year (Kung Hei Fat Choi!). It’s the most important festivity in the Chinese calendar. Traditions vary from region to region, but decorations are put up all over the towns and it’s popular for families to clean their house, preparing for the new year.

On New Year’s Eve – the night of the 22nd, the Chinese have a big supper with their relatives: pigs, ducks, chicken and sweet treats, followed by fireworks and celebrations.

Last year was the Year of the Metal Rabbit, from yesterday we entered the Year of the Water Snake. Because of this, the Shanghai Aquarium got divers to dress up as sea creatures. It’s so beautiful, watch the video and see!

“An unusual underwater sighting awaited children at this Shanghai aquarium. To celebrate the Year of the Dragon, divers donned dragon suits and mingled with the sea creatures.

Aquarium spokeswoman Wang Jieying says the Year of the Dragon, which is considered lucky in China, offers a great business opportunity.

– Because 2012 is the Year of the Dragon in China, and people believe the dragon lived in the ocean, we decided to combine the dragon, which is a mythical creature of ancient China, with the aquarium business, and we came up with this event.

The dragon’s body had to be not only waterproof, but also porous, so that it could move through the water easily. And the attention to detail paid off.

– I saw the dragon and stingrays today, the dragon is more colorful. I’m really happy. We’re going back to our hometown to visit my grandparents for the New Year, and I’ll tell them about today.

The show will run until February 2nd – the final day of the New Year holiday.” 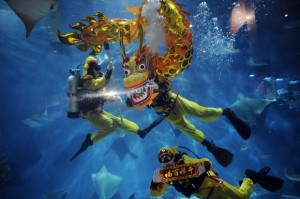 Sighting – an act of seeing something or someone that is rarely seen or difficult to see.
Example: “There was only one sighting of the Bengal tiger last year”

Divers – a person who swims underwater usually while using special equipment to breathe.
Example: “My boyfriend is a professional diver; he’s in Thailand now”

Donned – to put on (a piece of clothing).
Example: “Maria donned her wedding dress, it looked perfect!”

Suits – a set of clothes or protective covering that is worn for a special purpose or under particular conditions.
Example: “We had to put on our diving suits before going into the ocean”

Mingled – to combine or bring together two or more things.
Example: “All the flavours in the soup mingled together”

Spokeswoman – a woman who speaks for or represents someone or something.
Example: “That woman is the spokewoman for the Acumen Fund”

Mythical – based on or described in a myth. A myth is a story that was told in an ancient culture to explain a practice, belief, or natural occurrence.
Example: “The dragon is a mythical animal: it doesn’t really exist”

Waterproof – designed to prevent water from entering or passing through.
Example: “It rains all the time in the UK, you must bring a waterproof jacket”

Porous – having small holes that allow air or liquid to pass through.
Example: “The material was porous, so water could go through it.

Stingrays – a type of fish that has a large, flat body and a long tail with spines on it that are used to sting other animals.
Example: “Stingrays are from the same family as sharks”