How are you this morning? Ready to learn some English and find out the latest news?

French archaeologists finished up the excavation of an impeccably preserved woolly mammoth skeleton on Thursday (November 8th) at a quarry 50 km east of Paris.

Scientists working at the excavation site applied a silicon cast to the mammoth remains before they will be removed it. The nearly complete mammoth skeleton, only the fifth such specimen found on French soil, is causing a stir in the archaeological community not only for its completeness – a rare occurrence in itself – but also for the flint spearheads found amongst the remains.

The discovery will allow archaeologists and scientists to better understand early humans’ relationship with the colossal mammal. Nicknamed Helmut by the excavation team, the mammoth’s skeleton is estimated to date from 125,000 to 200,000 years ago. 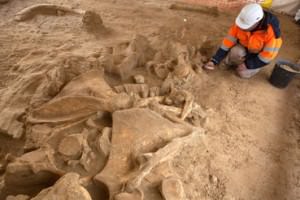 Excavation – to uncover (something) by digging away and removing the earth that covers it.

Impeccably – free from fault or error.

Woolly – covered with wool. Wool is the soft, thick hair of sheep and some other animals.

Mammoth – a type of large, hairy elephant that lived in ancient times and that had very long tusks that curved upward.

Quarry – a place where large amounts of stone are dug out of the ground.

Cast – a container that is used to give its form or shape to something that is poured or pressed into it.

Flint – a hard type of rock that produces a small piece of burning material (called a spark) when it is hit by steel.

Spearheads – a person, thing, or group that organizes or leads something (such as a movement or attack).

2012-11-15
Share
Previous Learn English with pleasure!
Next What to strive for?