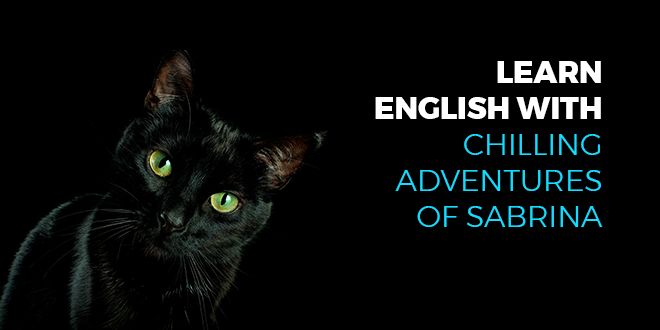 Do you like television series? Have you ever thought that they can be a useful and fun method to learn English? If you had not considered it, in this article we explain how you can use television series, especially Sabrina the Teenage Witch, not only to have a good time but also to practice your listening skills in English.

Learn to understand different accents in English with Sabrina, the Teenage Witch. @abaenglish…

Maybe when you think about learning English, you sigh and say, “It would be great if I could speak English easily and quickly by using a spell or a potion.” Unfortunately, witches like Sabrina do not exist in the real world. However, watching a series like this one can give magical results if you use the appropriate methodology. Here are some tips so you can get more out of the series and learn English at the same time.

What is Sabrina about?

Sabrina the Teenage Witch is an American comedy that ran for seven seasons between 1996 and 2003. The story is based on the series of Archie comics of the same name.

The central character of the story is Sabrina Spellman, a teenager who at the age of 16 discovers that she has magical powers. This beautiful witch lives with her aunts who are more than 500 years old and with her magical cat, Salem, who, apart from having very peculiar characteristics, can speak. Through each of the episodes, you can follow Sabrina’s adventures as she learns how to use magic.

The series includes a good variety of accents in English in addition to references to American pop culture. That aspect is certainly interesting and is a part of language learning.

You watch a clip from the series here:

How can you improve your English by watching Sabrina?

You will surely be asking yourself how a series like this can help you significantly in your English learning process. If you are constant, continuous exposure to the language by watching a television series will do wonders, because this form of natural exposure helps your brain to learn while listening and watching television. We could say that you will learn naturally.

Do not doubt it for a moment. You should always watch series in their original language because this will make your brain immerse itself in the language. In addition, there are tools to help you understand the general plot and even the details. One of them is subtitles. If you are a beginner, you can activate subtitles in your native language. Now, if you want to expose yourself in a more demanding way to the language and have already reached an intermediate level, you can use subtitles in English. This way, you will hear the dialogues in English, but will also read them. This will help you a lot with your spelling and grammar.

Pay attention to the cultural background.

One of the interesting aspects of Sabrina is that it includes a lot of references to American culture. This does not only include expressions, but also information about how to behave and relate. This is very important because culture is an element that must be studied to better understand a language when you are in the learning process. If you do not understand something, do not be afraid to stop the series for a moment and do some research on the internet. You will see how this will also help you better understand the dialogues and expressions from American culture.

As we already mentioned, in the series you will be able to listen to various accents, which will help you to train your ear to the different sounds of English as well as variations in pronunciation. This is very important because in real life you must have the auditory capacity to adapt and to understand different accents. Do not worry if, at first, you do not understand everything that Salem, any of the aunts, or Sabrina herself says. The more you expose yourself to the series, the more you will understand.

Obviously, the series deals with fantasy themes and, as is logical, the vocabulary used is closely related to this topic. However, issues that have to do with support between women and female empowerment are also included. Take advantage of this to learn more words in English. You can have a notebook at hand to write down the words you hear and what you learn while enjoying the series.

Therefore, we advise you to set aside time to learn English in a relaxed and fun way thanks to this series that will surely make you a smile often. And remember, it is important that you constantly expose yourself to the language.

Just like the series, ABA English’s online English course includes a diverse selection of accents in its short films so you can understand anyone, regardless of their accent. ABA English has an entertaining and effective method based on watching short films and video classes. It is a very entertaining way to learn. In addition, you will also have access to native teachers who will always be available to answer your questions.

Yes, I want to try the course!
Yes, I want to see a short film!
2018-12-10
Share
Previous Six Television Series to Improve Your English
Next The English Hashtags of 2018