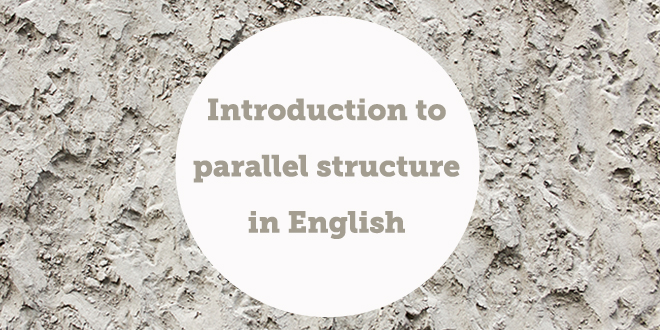 Introduction to Parallel Structure in English

You may have already sensed the “good” sentence in each of the pairs above. But if you’re still not sure, don’t feel bad. Like I said, this is an advanced English concept. We’re about to look at it in detail.

In each of the sentence pairs above, the second sentence is the better one. The second sentence is the one with parallel structure. Each #2 sentence has matching pairs of verbs or nouns. In Pair A sentence 2, to eat and to drink are both infinitive verb forms. So the grammar structures of these verbs are the same — the structures are parallel. In sentence 2 of Pair B, took and went also show parallel structure; both are past tense verbs. Finally, in sentence C2, we see both nouns in the singular with “the” used to label the nouns and broad categories. (See Rule 6 in my post on using “the” in English.)

In contrast, each of the first sentences do not have parallel structure. In Pair A sentence 1, to eat is infinitive, while drinking has an -ing ending and is present participle. In Pair B sentence 1, am taking is present progressive tense, but went is simple past tense. Finally, in Pair C sentence 1, the raccoon is singular and marked with “the,” while skunks is plural.

The rules of parallel structure in English

Obviously, the most important rule of parallel structure is that it requires two or more verbs or nouns to have the same grammatical form. But under what conditions must verbs or nouns have parallel grammar structure?

Rule # 1: Parallel structure requires that nouns and verbs have the same grammatical form

This is the most obvious feature of parallel structure, as seen and explained with the examples above. Parallel structure nearly always applies only to verbs that are used together or nouns that are used together. This is because verbs and nouns have some clearly different grammatical forms. Verbs have tense, participle, and singular/plural variations. Nouns can be singular or plural, and can have determiners (words like a, an, and the) attached to them.

Rule # 2: Parallel structure should be used within a single clause.

Rule # 3: Parallel structure is often used with verbs and nouns that are joined by conjunctions.

Rule # 4: Parallel structure should only be broken for specific reasons.

These are just a few possible examples of acceptable breaks in parallel structure. As long as you have a meaningful reason to make a group of nouns or verbs grammatically different from each other, you can break parallel structure.

How to Use Parallel Structure on the TOEFL

A good understanding of parallel structure can also boost your comprehension in TOEFL Listening and TOEFL Reading. Read or listen for parallel structures. When you encounter similar verb and noun forms in TOEFL sentences, you can know that these verbs and nouns are probably part of the same clause. This makes it easier for you to follow more complicated sentences without losing the “sense” of the sentence. It also helps to recognize breaks in parallel structure. If you notice a sudden change in verb or noun forms, you can recognize that certain actions or things are different in some way and are being contrasted.

Do you want to see more posts like this?
Yes I do!

David is a test prep expert at Magoosh. He has a Bachelor of Social Work from the University of Wisconsin-Eau Claire and a Masters in Teaching English to Speakers of other Languages from the University of Wisconsin-River Falls. He has been teaching K-12, University, and adult education classes since 2007 and has worked with students from every continent. Currently, David lives in a small town in the American Upper Midwest. When he’s not teaching or writing, David studies Korean, plays with his son, and takes road trips to Minneapolis to get a taste of city life. Follow David on Google+ and Twitter!