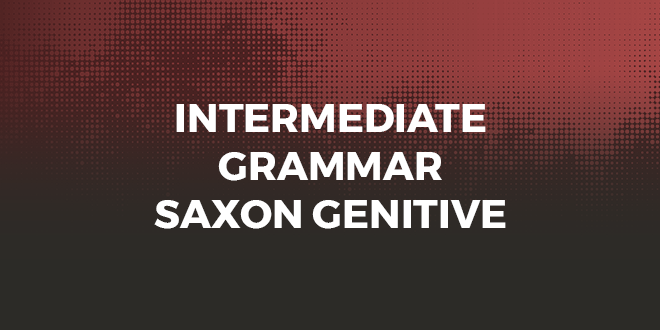 Today we’re going to talk about the English possessive or Saxon genitive, which is used to show ownership or possession. It is formed by adding ’s to the word indicating the owner.

It is easy once you know how to do it but sometimes tricky to remember to use it.
Here at ABA we always try to make things easier for you so let’s have a look at how it works!
Do you know what your English level is? Check it out before we start!

The possessive is used to show ownership of something by someone, let’s see how it works!

My teacher’s explanation” or “my teacher explanation”? Check out the Saxon genitive with @abaenglish

When we are referring to singular nouns, we add ’s to the end of the word.

It’s Kim’s jacket. My jacket is a different colour.

The dog’s ball is green.

However, when we are referring to plural nouns which end in “-s”, we simply place the apostrophe at the end of the word.

My parents’ car is a Toyota.

Their friends’ houses are all bigger than theirs.

There are some exceptions, however, where the ’s is placed after the plural noun.

My children’s friends all live in the same neighbourhood as us.

I often don’t understand other people’s opinions on politics.

The men’s section is on the third floor

If there are multiple nouns, only add ‘s to the last noun.

Kevin and Arthur’s sister is a doctor.

English is fun with ABA English, so make sure you don’t miss out on your opportunity to improve.