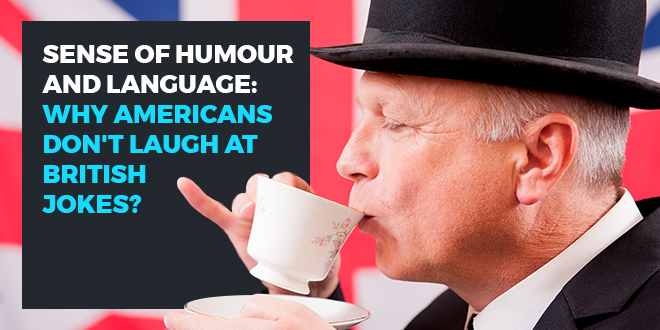 As the great writer Bertolt Brecht said, “History is horrible without humour.” In fact, what is humour, if not the ability to understand the comic side of situations in life, even of the most tragic?

But the key to humour, or of a certain kind of humour, lies not only in the nature of human beings themselves, but also has its roots in the culture and traditions of a nation. For example, have you ever wondered why certain jokes make you laugh in some languages, but not in others?

The differences between British and American humour as explained by @abaenglish.

Our sense of humour, in fact, is partially linked to our history and our perception of life. In addition, humour always requires a certain degree of reflection.

When talking about humour, British humour comes quickly to mind: sharp, intelligent, and, at times, ruthless. And American humour? Maybe one of Woody Allen’s clever and meditative quotes comes to mind immediately, but that is another story. Let’s find out why.

British humour focuses on the comic and absurd aspects of what happens every day.

One of the most distinctive features of humour in Britain is the ability to remain impassive. The person who makes a joke can be so serious that it can be almost impossible to understand if they were joking or if they had the serious intention of making a piercing observation.

In addition, an essential ingredient is exaggeration, which is used in order to highlight precisely the defect and the aspect of the personality that you want to point out. And here we come to another important aspect: sarcasm, which is when we emphasize our own and other people’s flaws in a bitter and poignant tone. If you happen to hear some phrase that is a little critical of any of your flaws or your way of doing things, do not rush to the conclusion that the speaker is being serious. Even the most serious look and the sharpest phrase could hide a joke. In fact, if you hesitate a bit to laugh or respond, you might hear your interlocutor say, “I was just kidding!”

Oh, I did not know that you could say something smart!

I’m sorry, but I can’t be a friend of someone who drinks only coffee!

One of the keys to understanding if something is a joke is the fact that you will almost certainly perceive a self-critical tone from your interlocutor. Self-irony, that is, the ability not to take oneself too seriously and to joke about one’s own shortcomings, is another important ingredient. In fact, a joke has no motivation other than to de-dramatize a serious situation and to take the bitter side of life lightly.

This morning, I was so distracted that I put on my grandmother’s bra!

This is confirmed by the characters using British humour on British television. The British love to attack the losers, those little clumsy characters who struggle to find their place in life. This is not only a way to de-dramatize, but also to exorcise fears. This serves to show, fundamentally, the defects and serious errors that we all have in common. Irony is so steeped in British culture that the website onepool.com has launched a survey to vote for the most beloved British jokes.

Finally, a very common ingredient in British irony is represented by paronomasia, which in English is called pun and is a play on words that exploits the multiple meanings of terms or the homophony between words to generate a comic effect.

Example (In this case, the play on words refers to the verb to stick, which can indicate the action of adhering with glue or sticking to the given word.)

Always trust a glue salesman. They tend to stick to their word.

What about American irony? Perhaps it would be easier to create a definition of American irony if it is compared with the British since the American tradition in this sense is not as ingrained as in the UK.

In the UK, irony is an intrinsic value of the culture. In the United States, however, irony has a specific field and there are situations and events in which it could be perceived as out of place.

It is also more open and easier to identify, even for those who do not know American culture well. It is a rather kind way of making fun of a friend who is nice and worthy of one’s friendship. It has nothing of the bitter and subtle tones of British humour.

While you will never hear a British person apologize immediately after a joke, very often you will hear an American complete their sentence by saying, “Just kidding!”

Did you put a pineapple on your head this morning? I’m kidding!

The main reason for this difference is certainly the cultural difference between the British and the Americans. Americans are not afraid of their emotions; they express them openly and blatantly. On the other hand, the British do not show their emotions and can hide them behind a sarcastic smile or the liberating power of a joke.

And what about the irony of the great Woody Allen? It is a certain kind of American irony from the Jewish tradition of which there are many examples in the history of American cinema, from the Marx Brothers to the Coen Brothers. It is something very different.

The best way to avoid allowing an ironic joke in English to surprise you is to know the language well. ABA English’s online course offers 144 grammar videos and the same number of short films that will help you obtain the necessary skills to deal with daily communication. We are not kidding!

Yes, I want to try the course!
Yes, I want to download the app!
2018-11-26
Share
Previous 10 Ways to Say “Good” in English
Next Six Television Series to Improve Your English