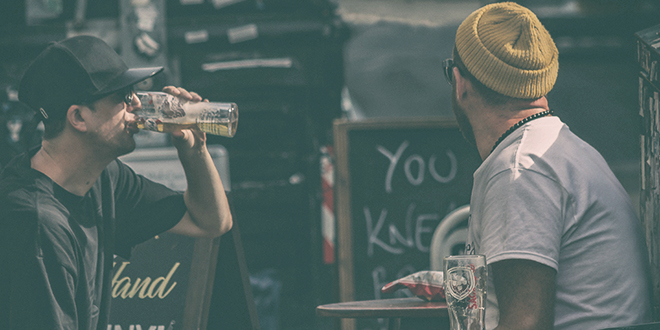 How to order a beer in a British pub

In many countries around the world, the word “beer” refers to the type of alcoholic beverage associated with brands like Budweiser and Heineken. However, in the United Kingdom the term “beer” is very ambiguous and is much like saying “wine”; you are missing all the details that separate lager from stout, for example. Brewing methods, ingredients, ages, styles, flavours… it’s essential you become familiar with them if you want to get the most out of your drinking experience and get exactly what you want when order a cold brew down the pub.

In the United Kingdom, the most common beer is the one which the British refer to as “lager”. This word originates from the German word “lagern” which means “to store”. It’s the most popular style of beer in the world and most likely what you would be given in any country if you just ask for “a beer”.

Lager is the finished product of brewing using hops and is a highly carbonated drink whose colour can range from pale to medium gold and is generally served at very cold temperatures It has a very refreshing taste and pairs beautifully with a warm summer’s day. Now, let’s think about how you would order a lager:

Bartender: What can I get you? (What would you like to drink?)

Customer: What lager do you have in bottle or draught form?

Bartender: We have Heineken on draught, Miller in bottles.

The world of ales and their subcategories is endless and can awaken an obsessive interest in thirsty travellers when visiting the UK. The differences between ales and lagers are significant, not just in taste but also in brewing process and colour. Unlike lagers, which are generally carbonated and  just made from hops, ales are fermented with yeast at cellar temperature. Many ales are often flavoured with fruits or spices to give them a unique taste and not just a hoppy finish. In other parts of the world, they may also be referred to as “Craft” or “Artisan” beers.

The differences between ales and lagers are significant, not just in taste but also in brewing…

Here are some different ales that might tickle your fancy:

Abbey ales – Ales which do not follow a set brewing guide as such.

We understand that it can almost seem impossible to make a choice knowing just how many ales are out there, so let’s check out how a typical conversation might go when you pop into a bar:

Bartender: What can I get for you?

Customer: What ales do you have?

Customer: Is there any particular one that you could recommend?

Bartender: Well if you wanted an IPA, we have a big seller called Green Devil by Oakham Ales. It has a fruity citrus taste and is very popular with the locals. Not too sour.

Customer: If that is popular with your locals then I will give it a go. I’ll have a pint, please.

The most famous stout in the world is Guinness and is pretty much sold everywhere. Stouts, unlike lagers, don’t travel too well and tend to taste less nice the further they have to go before they are sold for consumption. And unlike ales, stouts are very creamy and tend to have a more savoury flavour profile. Their taste comes from barley and the breweries will often add dark roasted barley to ensure their product has a unique flavour and dark colour.

Customer: Hi there! What stouts do you have?

Bartender: We have plenty of ales and lagers but the only stout we have is Guinness

Customer: That’s okay, I will have one of those then. I see you have an extra cold version, too. Which is great because I love a cold beer!

Which one is for you?

No matter which kind of pub you go to in the United Kingdom, there will always be a wide range of lagers, ales and stouts so a good thing to bear in mind is to have an idea of what you want before you go in, otherwise you may become indecisive. Alternatively, if you are willing to try new beers then just see what the bartender recommends. Either way, just enjoy the cultural experience!

If you loved learning about just how sacred the UK beer culture is and would like to keep learning about the English speaking world, join our course and access 144 video-classes immediately for free.

Right, who’s ready to put their beer goggles on?

SIGN UP TO THE COURSE FOR FREE
GET THE APP FOR FREE
2017-08-13
Share
Previous Episode #5: The Seasons | ABA on Air
Next Past simple affirmative of the verb “to be”