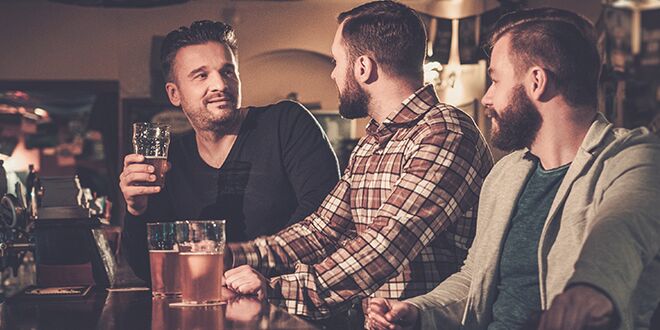 How to fit in at a British pub

As you know, the British, like most nations, take their culture very seriously and a massive part of that is the pub culture. This is an integral part of British society as it is where a lot of socialising and letting down of one’s hair go on. In today’s post, we are going to look at some rather important tips that will help you integrate well into this vital part of British life.

Many people may think that saying hi to people that you don’t know in a bar is weird but in reality, it is polite to acknowledge other patrons who are seated beside you.

So next time you pop down the pub for a brew, say hello!

In a lot European countries when people go for social drinks with their friends, they tend to pay for their own drinks individually at the end of the night, but this is not the case in Britain. Let us introduce you to the concept of a “round”. This is what happens when a group of four friends go to a bar. One of the friends will buy four beers for the whole group, followed by another friend and another, until everyone has payed for a round. In the end most people spend the same as they would have if they had bought their own beers without having the hassle of going to the bar every half an hour.

If there is a big group of friends at the pub- maybe too many to do rounds, then people often do a “drinks kitty”. This is when every person at the table or at least every person who wishes to participate in the drinks kitty, puts in twenty pounds which then pay for the following rounds. In other words, if there are ten people present who each put in twenty pounds, then the group will use those two-hundred pounds to pay for drinks for the group until the money runs out. This is often an easy way to avoid the usual dilemma of “whose round is it?”. Get involved in the shared pub spirit of rounds and drinks kitties to ensure you fully immerse yourself in British pub culture.

A good way to make yourself very unpopular in a pub, especially when it’s busy, is to click your fingers at the bar staff to get their attention. We don’t recommend you do this if you want to integrate well at your new watering hole. Patience is key to getting served and if you stay calm, the bar staff will get to you eventually. Here’s an insider suggestion: you could give your waiter a couple of pounds tip on your first drink and say to them to “take one for yourself”, meaning that they should use that money to buy themselves a drink at the end of their shift. This will increase your chances of getting served faster next time.

So a key point about British pub culture is pints in general. When you go to a British pub, don’t be the person who orders a half-pint of lager (beer), unless you want the whole pub turning round to see who ordered it. It is very commonplace for both men and women who drink beer, cider or ale, to order it in pint form and not half pint form. Want to pace your drinking? We understand! However, the only way you will avoid a “slagging” (when people make fun of your jokingly) for ordering a half-pint, is topping off an existing pint quietly and hoping nobody notices. So: remember to always order pints if you’re getting any type of draught beer.

Embrace pub culture and learn as you go…

It’s true that learning pub culture seems like a bit of a mission, but we promise you that if you really want to become a British local, going down the pub is the way to go. Just remember to acknowledge others, be patient when waiting to be served and never order a half-pint and you’ll get on just fine. Let us know about your good experiences in British pubs in the comments section.

If you want to start training to be a British local…