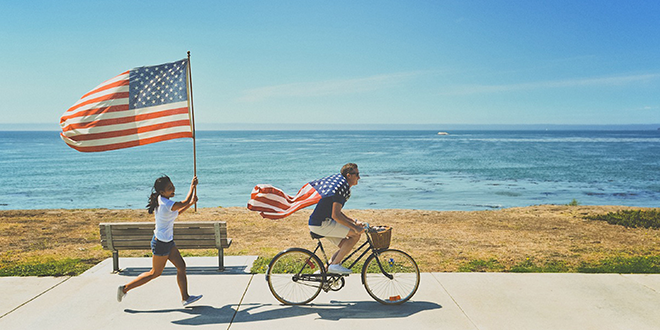 How to Celebrate Independence Day in the United States Correctly

Perhaps one of the most recognized independence parties worldwide is that of the United States, which is celebrated every 4th of July. Do you know what this American party is about?

@abaenglish explains how to celebrate the independence of the United States like a true American.

All countries celebrate their independence day in a very particular way, but in recent times there are very few national holidays that have remained a day of authentic celebration. In many places, it is treated like any other day. In the United States, however, they have maintained the tradition of celebrating the 4th of July with friends and family. It is one of the days where we could say that the country is paralyzed.

The Origin of the 4th of July

Independence Day, which is better known as the Fourth of July, is the day in which the United States was born. It is the day in which they established their independence from the British Empire. On 4 July 1776, the American colonies that were at war with Great Britain declared themselves states in a new country. In the process of independence, there were many notable characters, but Thomas Jefferson is one of those who is still called a founding father.

This is how the United States began celebrating their independence year after year. The first anniversary was celebrated in Rhode Island in 1777 with a thirteen shot salute to the thirteen independent colonies. Since then, this holiday has been celebrated in the entire country every year.

You may be familiar with the celebrations that you have seen on television or in the news. They generally include fireworks, concerts, parades, or official celebrations in cities like Washington D.C., Philadelphia, and Boston. If you find yourself in the US on this special date, it is likely that you will be able to celebrate the holiday with some friends in an authentic and genuine way, like an American.

Practically all cities will have fireworks displays at nightfall, but you could participate in a deeply-rooted American tradition beforehand: the community picnic. Many organizations, churches, businesses, and military bases organize open picnics where you can enjoy typical 4th of July foods like barbecue, hot dogs, hamburgers, salads, and delicious desserts in patriotic colours.

Another familiar tradition is the backyard barbecue, a symbol of the American dream. This is generally a more private gathering in which only family and close friends participate. There are also moments of play between children and adults that includes water. Remember that in the US this holiday falls in summer. These are very fun moments!

The tradition of a barbecue (or BBQ) definitely has no competition in the United States. What is it? This is a space which is prepared in the back of a house or in the garden and decorated with patriotic colours. Traditional dishes are prepared ranging from hot dogs and hamburgers to ribs and wings. This is accompanied by a classic potato salad, french fries, and corn on the cob.

There is also a very special place for the desserts, which are generally prepared in the national colours: red, white, and blue. Here creativity is allowed to shine over a countless number of desserts. Perhaps one dessert that will never be left out of the party are the delicious cupcakes.

This is a very informal celebration where everyone serves themselves and shares in the joy of being together.

What Is the Best Way to Celebrate?

Whether you are in the United States on this date or if you want to celebrate it with your American friends in another part of the world, now you have a general idea about traditional ways to celebrate the 4th of July. The most important thing is to celebrate the culture of this English-speaking country. You will surely have no problems in achieving that and can prepare the traditional dishes without problems. Also, remember that this is an excellent opportunity to practice your English with friends.

If you feel as if you still could use a bit more fluency in the language, why not sign up for an ABA English online course? We offer 144 free video classes with which you can learn grammar. You can also learn to communicate effectively thanks to our short films and the aid of our native teachers who are always available to answer your questions not only about the language but also about English-speaking culture as well. Why are you waiting to improve your English?

OK, I want to try the course!
OK, I am going to download the app!
2018-07-03
Share
Previous Attending a Party in English
Next Volunteering in English