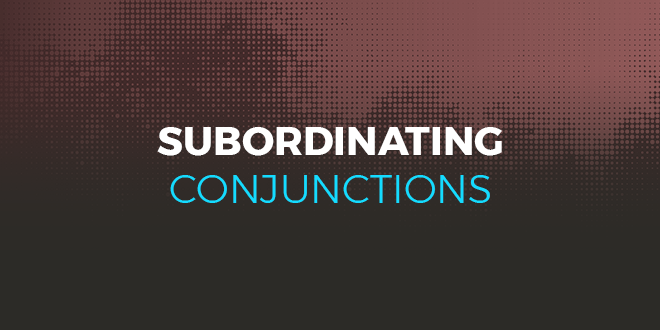 When we learn a new language, we often find that structuring sentences so that they sound natural can be somewhat challenging, however, this can be overcome. Today we are going to take a look at subordinating conjunction in English and how they are used to help the meaning and structure of sentences. Subordinating Conjunctions connect a dependent clause and an independent clause and establish a relationship between them. They happen at the beginning of a sentences (with a comma in the middle separating the clauses) or in the middle of a sentence with no comma.

Subordinating conjunctions have never been easier thanks to @abaenglish

The most common subordinating conjunctions are:

After – later than the time that : later than when.
Example: “Call me after you arrive at work”

Although – despite the fact that : used to introduce a fact that makes another fact unusual or surprising.
Example: “Although she was tired, she couldn’t sleep”

As – used to introduce a statement which indicates that something being mentioned was known, expected, etc.
Example: “As we explained last class, coordinating conjunctions are sentence connectors”

Because – for the reason that.
Example: “I painted the house because it was a horrible colour”

How – in what manner or way.
Example: “Let me show you how to knit”

If -used to talk about the result or effect of something that may happen or be true.
Example: “It would be fantastic if you could come to the party”

Once – at the moment when : as soon as.
Example: “Once you’ve learnt how to cycle, it’s very easy”

Since – used to introduce a statement that explains the reason for another statement.
Example: “Since you’ve studied so well, you can go outside and play”

Than – used to introduce the second or last of two or more things or people that are being compared — used with the comparative form of an adjective or adverb.
Example: “My sister is older than I am”

That – used to introduce a clause that states a reason or purpose.
Example: “Olivia is so happy that it’s summer again”

When – at or during the time that something happened.
Example: “A teacher is good when he inspires his students”

Where – at or in the place that something happened.
Example: “We went to the bar where there most shade”

Whether -used to indicate choices or possibilities.
Example: “Bruno wasn’t sure whether to go to India or Thailand”

While – during the time that something happened”
Example: “While we were in Paris, it snowed”

Until – up to the time or point that something happened”
Example: “We stayed up talking until the sun came up”

Due to the fact that there are so many subordinating conjunctions in English, don’t panic if you feel like you cannot remember them all as this will take a good period of time. In addition to subordinating conjunctions, you will find advice on every aspect of grammar on the free ABA English course. If you sign up for free, you will get free access to 144 video classes ranging from beginner to advanced in terms of difficulty.

Start studying to day with ABA English to make sure that your English keeps improving.