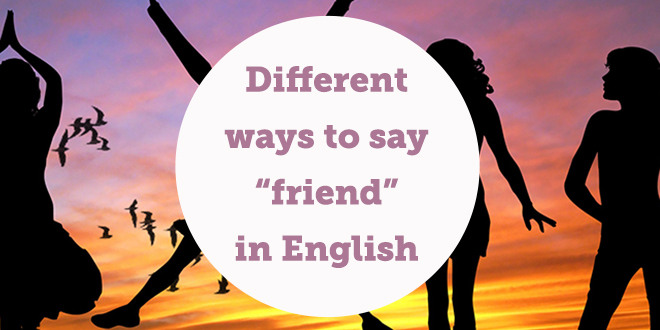 We all know that in every language, there is a variety of words to mean the same thing sometimes, otherwise known as synonyms. The English language is no stranger to this and in many instances has more than one word to describe the same thing. In this post we are going to look at different ways in which we can express the word “friend”.

Thanks to @ABAEnglish, I can say “friend” in many ways in English!

The word “mate” is a very British word which means “friend”. It is the most commonly used word in the United Kingdom meaning “friend” and is in fact used in this context more widely than the word “friend” itself. The United Kingdom can’t take all the credit for the usage of this word however as our friends in Australia and New Zealand use this word just as much as the British do. The funny thing is, if you were to say it to a North American, they might not understand it at all.

Using this word in the United Kingdom is very common indeed and expressions such as “best pal” will often be heard. Outside of the United Kingdom the word is globally understood but not commonly used. If you go to the UK, instead of asking who someone’s best friend is, try asking who their best pal is instead.

Using “chum” to express the idea of someone as a “friend” is a more old fashioned way to go about it. This word is globally understood but not commonly used. On the other hand, what we may hear more of is its adjective, “chummy”. It is not so unusual to hear someone asking two people if they are “chummy”, although it could also be perceived as having a meaning that may be more than friends.

If someone refers to someone else as their “bezzie”, it implies that the person they are referring to is their best “friend”. Like the other words we have spoken about, this would generally be understood all over the English speaking world. There are however variations of this word such as “bestie” or abbreviations like “bff”, “bffl”, “bbf”.

Are there any other ways?

We are certain that there are many more ways in English to refer to someone as a “friend” and many of them can just be local words. If you know of any more interesting ways and can put them in sentences for us, then we would love to know.

If you would like to learn more fun vocabulary: