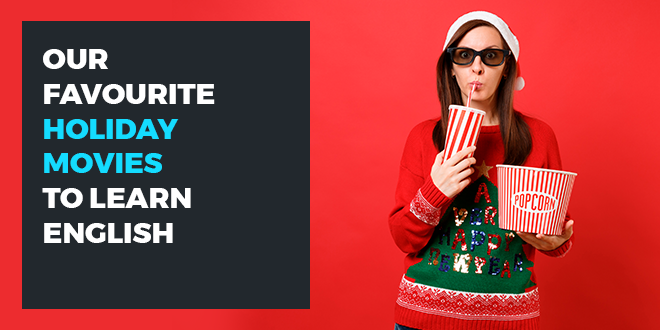 If you want to improve your listening comprehension in English and have no one to practice with, an excellent idea is to watch films in their original language. Films allow you to listen to different accents and teach you the everyday phrases that most people use in their native environment.

Do you like Christmas films and want to improve your English? @abaenglish recommends the best films…

Taking advantage of the fact that Christmas is just around the corner and do not miss out on the opportunity to have a Christmas marathon with the best seasonal films which will allow you to practice your English at the same time. In the following films, you can find a lot of vocabulary for holiday parties as well as experience first-hand the way in which American families live and celebrate together. All are very fun and suitable for all audiences. Prepare a family-sized bowl of popcorn and make yourself comfortable!

This Christmas story has become a classic since Dr Seuss published the book in 1957. Several films have already made about the book, but the new version from Universal Pictures and Illumination released in November 2018 has won the hearts of many. In this film, you can see how this lonely grouch plans to steal Christmas on the big screen. However, the Grinch does not expect to encounter the innocence and tenderness of a child that will make him begin to doubt his evil plans. The film is rich in vocabulary related to the holidays and is simple to understand.

The most classic of the Christmas classics. If you have already seen this film dubbed into your native tongue and know the plot, it is now time to watch it in English. The dialogues are well articulated so it will be easy for you to watch without subtitles. Without a doubt, the first film in this saga is the one that stole our hearts because it captures the essence of all of the emotions that emerge when the holiday season arrives. Also, it is always fun to see Kevin’s traps in action.

Could you give gifts to all the children of the world in just one night? This funny film puts Scott (Tim Allen) in a complicated situation when Santa Claus is hurt and he has to take charge of the most anticipated night of the year. This film is full of humour and adventures. If you like comedies, this is one of the best options to have fun and learn not only vocabulary but also English expressions.

You definitely remember the classic story of the three Christmas spirits who visit a bitter man. In this film, the story takes place in New York and our Scrooge is Frank Cross, the bitter and cynical president of a television network. The spirits of Christmas – in the form of a taxi driver, a clumsy fairy, and death – visit him to try to soften his heart and to make him a better person. The dialogues in the film can be very quick, therefore, we recommend you use subtitles. If you do not understand something, you can pause the film and go back to rewatch the scene.

The Nightmare Before Christmas

In 1993, Tim Burton surprised the world with this stop-motion animated film. All Christmas films attempt to make their viewers discover the true meaning of Christmas and this story is no exception. Jack lives in the land of Halloween where every day there are scarecrows, witches, and naughty children going from house to house asking for sweets. When he tries to bring Santa Claus to his world, he realizes that Christmas has something special that makes it different from any other holiday. Prepare to write down a lot of festive vocabulary in your notebook!

A human raised by elves in the North Pole starts a journey in search of his original family. Will he be able to adapt to hectic life in the city? Spending so much time in the North Pole has taught him useful skills like throwing snowballs with great precision, but he is apparently not ready to live with his family. That is, unless a Christmas miracle occurs. In this film, you will learn a lot of vocabulary and also a lot about American culture.

This Spielberg film premiered in 1984 and tells the story of Gizmo, a small, hairy animal with large eyes. Everything is tenderness and happiness in the story until his owner gets him wet and realizes that he has the ability to multiply himself. As if it were not enough to have a closet full of little hungry animals, things get worse when they carelessly start eating after midnight. Their brown fur turns into green skin and their personalities take a 180-degree turn, causing them to become a threat to the small town where they live. Unfortunately, there are no subtitles available for the Gremlin language, but you can practice your English listening very easily as the dialogues in this film are simple and clear.

Now that you have a list of Christmas films to help you practice your English, how about giving yourself the gift of an online English course as well? ABA English offers 144 video lessons and the same number of short films so that you can learn English in an effective and entertaining way. In addition, it puts at your disposal native teachers who will accompany you in your learning.

Yes, I want to see a video class!
Yes, I want to try it now!
2018-12-24
Share
Previous How to Write an Email Wishing Someone Happy Holidays in English
Next How to Communicate in a Spa in English