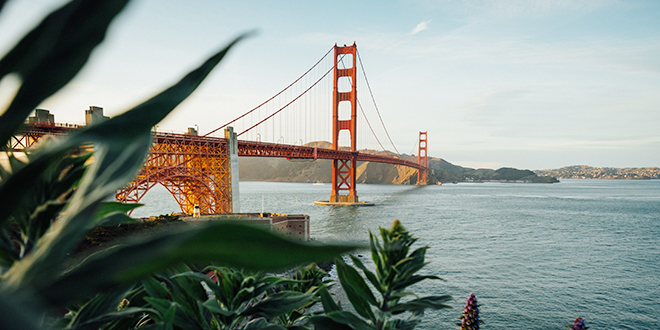 A visit to San Francisco: Film, Novel and Song

San Francisco, located in the San Francisco Bay Area, is an eclectic and fascinating city. With its hills near the seas, its ethnic neighbourhoods, and its lively markets, it is one of the most popular international destinations in the United States. If you are considering San Francisco as a destination for your next holiday, prepare yourself in advance with information about the places you cannot miss. A motorcycle ride over the Golden Gate Bridge, a walk through the chaos of the Ferry Plaza Farmer’s Market full of both people and shops, watching the sunset over the splendid bay, all of this can make your experience unforgettable.

@abaenglish introduces you to San Francisco through a film, a novel, and a song.

You could also immerse yourself in the atmosphere of the city, savouring it through books and songs. In fact, there are many songs that speak about this extraordinary city. We have chosen one book, one song, and one movie that will help you understand the magic and life of this city. Everything strictly in English, of course.

Perhaps not everyone knows that it was precisely San Francisco that was home of the hippie movement in the 1960s and the Vietnam War protests. From 1965 to 1968, the streets of San Francisco were filled with young protesters who extolled peace and freedom. Director Ralph Arlyck, then a student at the University of San Francisco, made a short film that related the social upheavals of the time through the naïve eyes of a 4-year-old child. The movie lasts about 14 minutes and is titled Sean.

Thirty years later, the director returned to San Francisco to look for Sean and to find out what had happened to the child. This gave rise to a reflection on the generational changes that had taken place at the time and shares interesting details of the city.

This is novel by the writer Isabel Allende, developed mainly in San Francisco. It tells the story of a brave young chilean girl, Eliza, who leaves Chile in search for her boyfriend who left her to seek his fortune in San Francisco Bay. Eliza arrives in San Francisco along with a Chinese man, Tao Chi’en, who worked as a cook on the ship and who had taken upon himself the task of supporting her on her trip. Once in San Francisco the two begin a new life. Eliza discovers that the United States is a land made not only of promises and freedom, but also of contradictions and disappointment. The people that they come in contact with are from many different origins: Native Americans, Irish, Mexican, and Chinese. They are united by gold fever and the desire for a change in their lives. The novel is based on the varied humanity that began to reach the shores of San Francisco in the mid-19th century in the midst of the gold rush, all in search of a wealth as easy as it was ephemeral. The historical backdrop narrates the extraordinary development of the city of San Francisco, which went from being a small fishing village in the late 18th century to a great metropolis of luxury and culture a little more than a century later. Here is a fragment from the novel:

“The town of Yerba Buena, founded by a Spanish expedition in 1769, had less than five hundred inhabitants, but as soon as the news of the gold spread, the adventurers began to arrive. Within a few months, that quiet town had awakened with the name San Francisco and its fame had reached even far away countries. For the moment, it was not yet a true city, but rather only a giant camp of transient men. The gold fever had left none indifferent: blacksmiths, carpenters, teachers, doctors, soldiers, investigators, preachers, backers, revolutionaries, and docile madmen of all kinds, who left their families and possessions behind to cross half the world in search for adventure. The main streets, formed by large semi circles whose ends touched the beach, were crossed by straight lines that descended from the steep hills to end at the dock. Some were so steep that not even the mules could climb them. Suddenly, there was a tempestuous wind that raised whirlwinds of dust and sand, but soon the wind diminished and the sky became clear. There were already many buildings and there were dozens under construction, including those that were advertised as future luxury hotels, but, for the rest, there was only a jumble of temporary accommodation: huts, houses made of tin, wood, or cardboard, tents, and thatched roofs.”

This is an American folk song written by Jesse Fuller in 1954. It has been performed by a number of great artists over the years, from Bob Dylan to Janis Joplin. Here is Eric Clapton’s version:

What They Say About Her…

To figure out if visiting a city so far away is worth it, you can ask advice from someone who has already visited it. Here is what some famous people have had to say about San Francisco after meeting her and falling in love.

“San Francisco has only one drawback: it’s hard to leave.” — Rudyard Kipling

“I don’t think San Francisco needs defending. I never meet anyone who doesn’t love the place, Americans or others.” — Doris Lessing

“Chicago is the great American city, New York is one of the capitals of the world, and Los Angeles is a constellation of plastic; San Francisco is a lady.” — Norman Mailer

Ready for Your Trip?

We bet that if before reading this article you were still undecided about visiting San Francisco, you are now convinced beyond a doubt. However, if upon hearing the song “San Francisco Bay Blues” you realized that you need to brush up on your English and familiarize yourself with the American accent, why don’t you try the English course at ABA English? We offer 144 free video classes as well as a good amount of short films that will leave your American English impeccable. What are you waiting for?

OK, I want to try the course!
OK, I am going to download the app!
2018-05-10
Share
Previous What’s the origin of the North American accent?
Next Volleyball Vocabulary in English