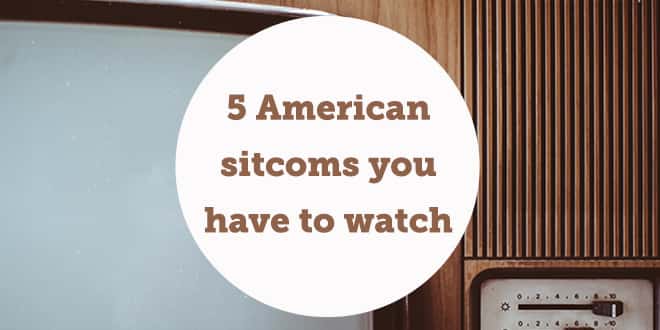 5 American sitcoms you have to watch

We all know learning a language is challenging but getting to know and understand the humour can be one of the biggest tasks anyone learning a language faces. How do we know what kind of humour it is? How do we know if we have fully understood? These are questions that can only be answered and understood over a long period of time and with a lot of patience. Today we are going to look at 5 American sitcoms that will help you really get to know American humour and help you understand jokes in English.

I enjoy learning English watching American sitcoms thanks to @ABAEnglish

One of the most famous, some even argue the most famous of all American sitcoms. Running from 1994 until 2004, it followed the lives of 6 friends in their twenties living in New York City. Filmed in front of a live audience, it was very successful and made a lot of money through DVD sales even after the TV series had stopped airing on television. Very much a silly type of humour with many different themes throughout the 10 seasons, this is one that is and will be continue to be appreciated by many people.

An NBC favourite from 1982 until 1993, this series ran for 11 seasons and made sure NBC controlled Thursday night television in the United States. Following a group of bar regulars and their lives in a Boston bar named Cheers, the series covered a variety of issues through comedy that all of the characters experienced in one way or another. Definitely one for people learning English who wish to understand American English humour in the 1980s. It is definitely worth a watch.

When people think of American series set in hospitals, most people instantly think of ER (Emergency Room) which followed fictional doctors and starred a few famous faces along the way too. Scrubs however was a comedy series following fictional doctors. Zach Braff, who is very funny in his own right does a fantastic job in this series portraying the character of Dorian and seeing what his life is like in the hospital in which he works. Perhaps the humour in this is more of a slapstick kind which maybe is not everyone’s cup of tea but definitely still worth a watch to obtain an insight into this kind of American comedy.

How I Met your Mother

Lead by the very funny and award winning Neil Patrick Harris, this American comedy series was similar to Friends in the style of its humour. This series however always appeared to have a final objective in mind from the beginning. Running for 9 seasons, it was very well received and was then shown in many countries around the world.

This is truly one of the best sitcoms that America gave the world. What actually started as a spin off developed into a sitcom in its own right amassing a huge audience. It follows Dr. Frasier Crane, played by Kelsey Grammer, after he moves to Seattle from Boston and follows him at work on his radio show in which he gives advice but struggles to solve his own problems. This series definitely gives the viewer an insight into sarcasm in the United States, albeit on a very minimal sarcasm level.

It’s only natural if you don’t understand all of the jokes or even a lot at the beginning as understanding jokes in a language that is not yours is very difficult. Persevere with the subtitles in English and do all you can and before you know it you will start to understand the type of humour in each sitcom. If you want to improve this, it’s only a question of practising.

By signing up and doing a free trial with ABA English, you’ll see how much English you learn in a very short space of time. What is stopping you from improving your level?