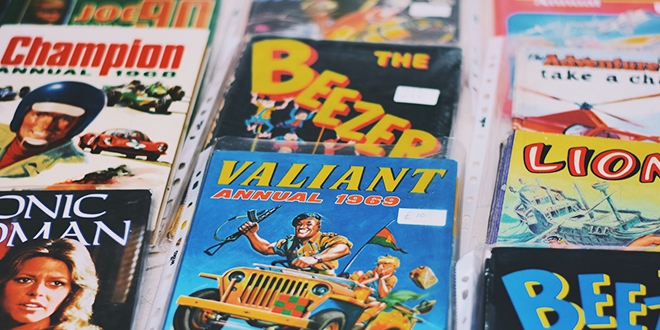 Why Learn English Through Comics

Do you like comics? Do you think that they are a form of art? You are not the only one to think so! Hugo Pratt has defined comics as “drawn literature” and, in fact, some publications are true masterpieces and classics of literature. What about comic book characters such as Spiderman or Batman that have become real icons? In addition, there are endless transpositions of comics with literary masterpieces and famous authors. Is history your passion? In this case, you also have access to a large selection of true stories and historical periods in this art form. In summary, the only difficult part is choosing.

@abaenglish explains how to learn English through comic books.

But, why read comics? Their strength lies in their combination of image and words which gives immediacy to the story being told and favours the involvement of the reader. When studying another language, then, comics are a true educational resource, especially in the early stages.

Comics and Studying a Foreign Language

Let’s look briefly at some reasons why comics are a great help for improving English.

The Language of Comics and Onomatopoeias

As we have already mentioned, the language of comics is generally simple and colloquial. Given the predominance of dialogues, we often find short and incisive sentences with subordinates being rare.

In short, if you want to use comics to improve your English skills, do not limit yourself to reading the dialogues, but also observe the images carefully! Remember, however, that not all onomatopoeia in comics are real words: before you start using them, check a dictionary.

Some Comics That You Can Read in English

Let’s look at some examples of comics that we found interesting and that we suggest you read.

Maus
If you like history, then you should read this masterpiece by the American artist Art Spiegelman. It tells the story of the Holocaust through the life of the author’s father, an Auschwitz survivor. The characters are drawn as animals with strong metaphoric values: the Jews are mice, the Nazis are cats, the Poles are pigs, etc. The book has been a great success and has received the Special Award from the Pulitzer Prize.

Calvin and Hobbes
The work of artist Bill Watterson is considered a true masterpiece of its kind. Calvin is a 6-year-old boy, impulsive and full of energy. He found Hobbes, his ragged tiger, to be the ideal friend. In addition to the adventures of Calvin and his relationship with the family and his classmates, it also addresses important themes such as ecology, education, and other current issues.

Batman
Published by DC Comics from 1940 to 2011, it is an absolute classic in comics and one of the greatest publishing successes. If besides reading the comics, you are also trying to look for the similarities with the film in the original language, this will give a good boost to your English.

Persepolis
Written in French by Marjane Satrapi, but translated into English as well, this is an autobiographical story. The author recounts her adolescence and early youth spent between Iran and Europe. She tells us about the revolution of 1979 and life in Iran from a more authentic point of view since it refers to the writer’s personal life experience. In 2007, the animated film was nominated for an Oscar.

Watchmen
This is a mini-series of comics written by the British author Alan Moore and illustrated by Dave Gibbons. They gather the best comic superheroes and present them in an everyday and humane way. After being declared illegal by an administrative decree, the superheroes have to deal with daily concerns and the fear of an international conspiracy to eliminate them.

If you are looking for a simple and enjoyable way to learn English, why not try ABA English? With our natural method based on short films, you will learn English with minimal effort.

OK, I want to try the course!
OK, I want to see a short film!
2018-08-14
Share
Previous The English You Need to Create Your Dating Application Profile
Next Everything You Need to Know About Phrasal Verbs