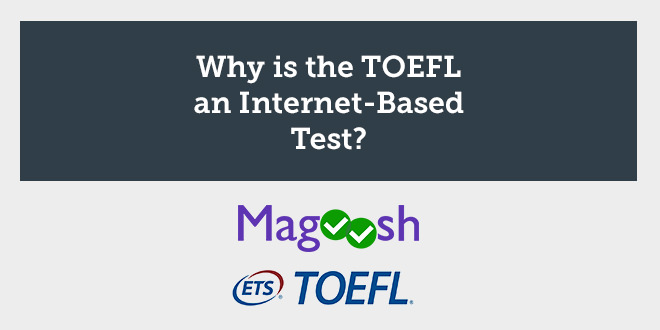 Why is the TOEFL an Internet-Based Test?

I work with a lot of students who have the option to take either the IELTS or the TOEFL. Many of my students who prefer the IELTS say they prefer it because it’s more “real.” By this, they mean that the IELTS is paper-based and interview-based, while the TOEFL iBT is entirely done by computer.

There’s no denying that IELTS Speaking is at least a little bit more authentic than TOEFL Speaking. In the IELTS, test-takers actually give their answers to real human interviewers who are in the room with them. And some of the answers are formatted as discussions, where dynamic, genuine human interaction is required. And certainly a lot of students are more comfortable writing their essays by hand, especially in a standardized test setting where the regular pre-writing process isn’t possible. Still, there are many advantages to the computer-based, automated nature of the TOEFL.

A computer-based test location is much easier to set up and maintain. ETS doesn’t need to hire certified interviewers, designate interviewing rooms, or maintain paper testing forms. This difference makes the TOEFL much more available than non-computer-based tests such as the IELTS. For comparison, the TOEFL has 4,500 testing centers in 165 countries, compared to less than one fourth that many test centers for the IELTS in about 25 fewer countries.

Even in India, where the British Council (the IELTS administrative agency) has a huge presence, the TOEFL is slightly ahead of the IELTS in availability, with locations in 59 major cities, compared to the IELTS’ 58 major cities. In most other countries, the difference is far more extreme.  To give one example, in China the IELTS is offered in just 37 cities, while the TOEFL is available in 51 cities.

This difference in availability can really affect students in more remote areas. For instance, in the rural part of the United States where I live, local ESL students need to travel nearly two hours to get to the nearest IELTS testing site…. But there’s a TOEFL testing site right here in my small town, and another one about 25 minutes’ drive from here. As a local university ESL instructor, I’ve driven students out to the IELTS testing site and watched them struggle with the exam because they’re tired from the trip.

The TOEFL iBT’s automated computer system allows test-takers to get their scores more quickly than they would after completing a paper-based test. In the deadline sensitive, stressful world of standardized testing this is a good thing; the faster you get your scores, the faster you can move forward with your admissions process, and your life. With the TOEFL’s computer-based test, scores are viewable online in 10 days, and can be sent out to schools in just 13 days. This is faster than any comparable paper-based test.

Using a compuer is more authentic in certain ways

When students are preparing for a paper-based test, I always caution them to get in some practice writing essays by computer. This is because in actual modern university study, professors expect nearly all student writing to be typed. Certainly, students who feel more comfortable with paper-based essays may benefit from taking a paper-based test instead on a computerized one. But in the long run, students should get as comfortable with computer-based writing as they can. As education modernizes, hand-written essays are on the way out, even in the lower grades.

The acts of listening to pre-recorded speech and uploading recordings of speech are becoming more authentic to actual classroom education. More and more, traditional classrooms include a companion online component. In the speech and communications departments at the university where I teach, my colleagues and I all have our students do at least some Internet-based voice recording. And online course pages usually contain some pre-recorded lectures, either from the actual instructor or from an outside source.

The TOEFL iBT and other web-based tests aren’t just designed for convenience and efficiency. Internet-based testing also helps prepare students for the technology-driven expectations in modern higher education. If you are much more comfortable with a paper-based test, you should take an alternative to the TOEFL iBT—doing so will increase your chances of admission. However, computer-based learning materials are still worth studying. Getting familiar with Internet-based assessment and learning will prepare you well for your future academics.

*****
This post was written by David Recine, expert at Magoosh TOEFL. For help preparing for the TOEFL, check out Magoosh’s TOEFL blog.