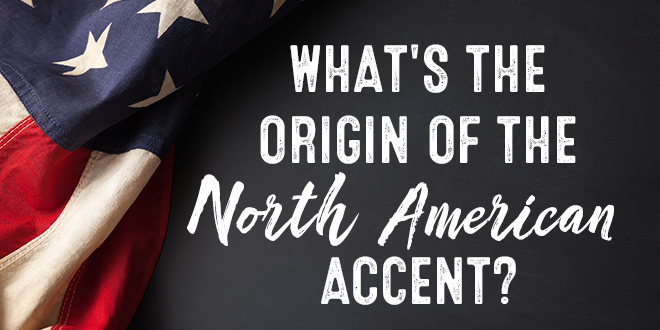 What’s the origin of the North American accent?

One of the most interesting questions that must be answered when speaking about the English language is why British and American English are so different in both lexicon and in accent. Many believe, and rightly so, that American English is a natural evolution of British English. In fact, many characteristics of American English are due to encounters with other languages and dialects.

@abaenglish presents some differences in pronunciation between British English and American English.

But, you will be surprised to learn that is not always the case. In some cases, such as with the ‘rhotic r,’ the original, oldest pronunciation is the American pronunciation. Could you have imagined that? Next, we will explain why this is and introduce some other differences between the American and British accents while trying to explain these differences.

In American English, the “r” is always pronounced, while in British English the “r” is not pronounced. This “rhotic r” is not only a peculiarity of the Americans but is also present in the English spoken in Ireland and Scotland. In ancient times, the “rhotic r” was also present in British English, up to at least the 19th century. In fact, it seems that at that time the “non-rhotic r” was found in the speech of the middle classes, which wanted to distinguish themselves socially from the lower classes. This aspect of English pronunciation soon because an indication of class and in a short period of time had spread throughout the country. Therefore, when an American pronounces the “r,” they are maintaining a phonetic aspect of the original English.

This is a feature present in much of American English as well as that of some of the British Isles. It consists of the identical pronunciation of two distinct words. Where does it come from? The scholars do not agree. Some argue that this is an independent evolution in American English, while others believe that it is due to influence from the speech of the Scottish immigrants and that this would have led to the spreading of this characteristic in almost all of English-speaking Canada and a large part of the United States. In truth, these are meticulous explanations and there is no true answer to this question.

Absence of the “Broad A“

In American English, the a is pronounced as /æ/ instead of /ɑ:/ in words like last, after, fast, and dance. It seems that in this case the evolution of the American accent occurred naturally without a precise explanation, simply evolving naturally over time.

Another difference for which there is no precise explanation, but rather a simple evolution separating the two variants which is linked to the tonic syllable in the spoken word. Here are some examples:

This is not so much a difference in pronunciation as it is in writing. Why are many words, such as color/colour, honor/honour, to organize/organise, written differently? The reason is quite strange, but also interesting. The vocabulary of American English was written down for the first time by Noah Webster, a lexicographer who lived between the 19th and 20th centuries. To mark the independence of the United States from British rule, Webster decided to eliminate the letters in some words or replace them with others that had similar sounds. This is the reason behind the purely visual difference.

Finally, to reiterate what was said about the “rhotic r,” American English is in some respects more faithful to Old English. But, let’s talk about the influence of French. British English is closer to French and the influence of the French has been felt throughout medieval history as well as in other eras. Around the 18th century, that is, when the United States had already achieved independence, in Europe French was considered the lingua franca and used as the language of exchange, diplomacy, and culture. For that reason, English acquired some of the aspects of French pronunciation and morphology which it maintains to this day.

These examples demonstrate how British English and American English have evolved differently and independently, and that the differences between them are not always due to a variation in the second in comparison with the first. If you are interested in learning more about the differences between British and American English, especially in pronunciation, you can try the short films offered by ABA English. They will help you learn the pronunciation of both types of English.

Yes, I want to try the course!
Yes, I want to download the app!
2018-04-27
Share
Previous Possessive Pronouns in English
Next A visit to San Francisco: Film, Novel and Song