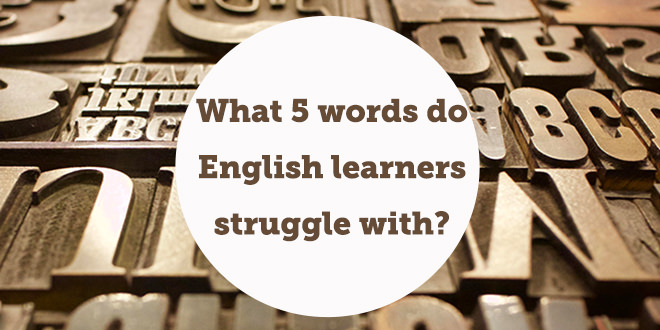 What 5 words do English learners struggle with?

How are you everyone?!

As we all know, English can sometimes be tricky and the pronunciation of some words even more so. Unlike other languages it isn’t always possible to just look at a word and guess its pronunciations straight away. Today we’re going to be having a look at some words which are often mispronounced by foreigners so that you no longer get them wrong (that is obviously only if you have been pronouncing them wrong until now).

This word is a very tricky word to pronounce indeed. Looking at the word we don’t see any sign of the letter “r”, however in its pronunciation we certainly hear one in an American accent.

Just remember that although we can hear a subtle “r” in pronunciation, it is not written.

Often causing a lot of problems, this word can be hard for foreigners to get their tongue around. The most common problem is that it is spelt with and “r”, however this is not pronounced.

Depending on whether you’re in the United Kingdom or the United States will change the way you hear and say this word. In Britain the stress of the word is on the first syllable, whereas in the U.S it is on the second syllable.

This word seems to have been qute modified by the Brits who pronounce it different to the Americans and actually very different from the French. We wonder if there was a slight discomfort feeling among the British people to change the word from the French sound. Americans on the other hand have generally managed to maintain the French pronunciation to date

Words which have a silent b can often be tricky as a lot of the time people forget that it shouldn’t be pronounced and say it. This word doesn’t escape this mistake along with other words like debt and doubt.

This part of London which is famous for the time zone which is named after it can be rather tricky to get one’s tongue around as we need to remember that there is no “green” or no “witch in the word. It is not really easy to guess this one unfortunately.

What should you do?

Obviously if there are words that you are unsure of, don’t worry. You should always give them a try and ask people to correct you if you say them incorrectly. Additionally, when studying, if you encounter a word that you have no idea how to say- check the pronunciation on the internet and listen back to it making sure you practise saying it.

If you would like to learn more awesome vocabulary, you know what to do:

Tell @abaenglish if you can pronounce these words easily