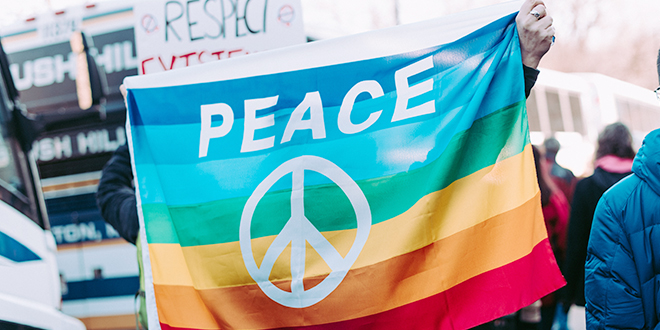 The Gay Lexicon in English

When reading magazines in English, you may sometimes come across the acronym LGBTQIA. This is an extension of the LGBT acronym, which can be found in other languages as well. Since we live in a world in which there is freedom of choice and everyone has the right to freely choose how they want to live as well as what standards they want to set for their lives, it is important to know the terminology for the gay community.

The acronym LGBTQIA is made up of the initial letters of the terms listed below:

Lesbian: A woman who is physically or romantically attracted to other women.

Gay: A man who experiences physical or romantic attraction towards other men.

Bisexual: An individual who experiences the same attraction to people of either sex.

Transgender: A person who does not recognize themselves in their body. They have a different sexual identity than the gender to which they were born.

Transsexual: This is a transgender person who has altered their physical appearance and physiology through surgical and / or hormonal treatment to affirm their own physical and psychological identity.

Queer: This term literally means “strange.” It includes all of the previously mentioned categories together. This basically identifies anyone who does not recognize themselves in the definitions of normality as dictated by society.

Intersexual: A person whose physical characteristics are not exclusively feminine or masculine.

Asexual: Someone who does not have a well-defined sexual identity.

Ally: An ally is a person who does not identify as queer but who supports the rights of the gay community.

When it comes to the gay community, you must pay attention to the terms that you use in order to avoid offending someone. Next, we will look at some words that may seem neutral or inoffensive, but which should be avoided in English-speaking countries. We will find out what they are and why it is preferable not to use them.

It seems that the term “homosexual” was used for the first time in 1869 by Karl-Maria Kertbeny, a Hungarian journalist who opposed the German laws against homosexuality. In the 20th century, however, the term was used by the American Psychiatric Association to categorize homosexuality as a mental disorder. This is where the negative connotations of the term are derived from. While in some languages this may not be the case, in English-speaking countries homosexual is a term that should not be used as it is considered offensive. On one side is the history of the word itself, on the other is the etymology of the word. For the gay community, in fact, the word “homosexual” contains a direct reference to sex and implies that the idea itself is an alternative sexuality to what is considered normal. It would be reductive, according to the gay point of view, to frame the gay identity as a simple question of sexual taste. For that reason, GLAAD, the Gay and Lesbian Alliance Against Defamation, added the word to their list of offensive terms in 2006 and convinced the Associated Press to limit its use. Therefore, it is appropriate to use the terms “gay” and “lesbian” which do not have sexual connotations and are therefore commonly accepted by the gay community.

In English-speaking countries, the debate also includes the difference between the terms sexual orientation and sexual preference. The first term is definitely more appropriate because it does not imply a voluntary choice on the part of the individual, even though this has not yet been scientifically proven. When abroad, therefore, it is preferable to use sexual orientation and to avoid expressions like sexual preference, homosexuality, lesbianism, heterosexuality, and bisexuality.

In Anglo-Saxon countries, the word gender is preferred over the word sex. This is because the word “sex” carries a substantial implication of sexual activity more than of personal identity. The word “gender,” on the other hand, is more neutral and refers to the person themselves instead of simply their sex life.

These are just some terms that have become a topic of debate within the international gay community. When travelling, it is a good idea to know the language and vocabulary of the countries you will visit in order to interact in a positive and respectful way with anyone, regardless of their personal choices or lifestyle. If you are thinking about broadening your English skills, you are on the right page. ABA English offers 144 free video classes and the same quantity of short films as well as qualified native teachers. What are you waiting for? Start your English-learning adventure today with vocabulary that will allow you to always know how to express yourself correctly.