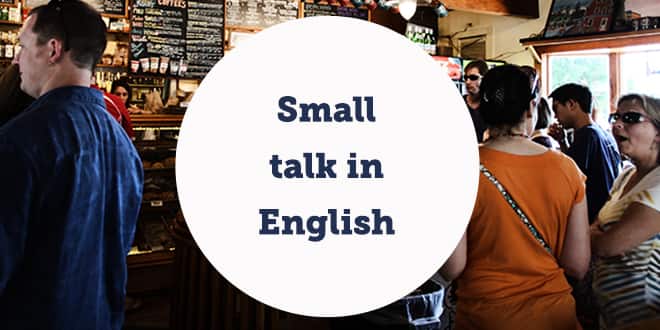 How to make small talk in English

So I think it’s fair to say that we have all been in situations where we have had to talk to people that we didn’t know beforehand. This could be because we are in an elevator with them or standing next to them in a queue. Generally the situation is more awkward if no conversation is made whatsoever, so to avoid this we generally make what is called small talk. In today’s blog post we will look at when to use small talk and what kind of things are appropriate to say and what we should avoid at all costs.

When would we use small talk?

The most common situations where we would be most apt to use small talk are more when we are forced to be close to people we don’t know in close proximity for a matter for time. This could be waiting in a long queue at the supermarket or sitting in a doctor’s surgery waiting on your appointment. Additionally it is not unheard of to create small talk with someone who is sitting next to you on a plane if you are both travelling together. In fact this can often help people who are nervous flyers to relax as it distracts them from the flight itself.

What do we generally say?

There are several topics of conversation that we can touch on with someone that we do not know and are making small talk with. By far the most common topic the world over is the weather. It is so popular because it is such a simple topic to talk about and something that absolutely everyone notices and is generally affected by hence meaning that people have an opinion about it to express as well. There are other topics for example if you are at a party and don’t know anyone it’s likely you could end up in a conversation with someone talking about sport or where they work.

Do you follow football? Did you see the match last night?

Do you have any plans this weekend?

As we can see, these are very generic questions which are inoffensive and provoke general conversation. In fact, most of small talk is inoffensive conversation and it is just a case of using common sense to establish what can be said.

What should we avoid when making small talk?

There are some people who don’t mind talking about anything but it is important to bear in mind that not everyone is like this therefore meaning that we should be careful when choosing which topics to base our small talk around. The key topics to avoid are definitely religion, politics and money. These topics can make people feel uneasy if they are not comfortable discussing their opinions in public or in actual fact could make you feel uncomfortable as you may not agree with their responses or opinions to your questions. These topics should just be avoided at all costs if possible.

Examples of what NOT to say:

How much is your salary?

What do you think about Donald Trump?

What religion are you?

By not making small talk about these topics, not only are you making life easier for the person you are talking to but also avoiding what could possibly be an uncomfortable situation for yourself as well.

It’s important to use common sense at all times. If you think that saying something would annoy you or make you feel uncomfortable then avoid saying it to someone else. It really is that simple. Try making small talk with people you meet from now on- you’ll find that you meet some interesting characters along the way.

Write your #smalltalk questions to @abaenglish