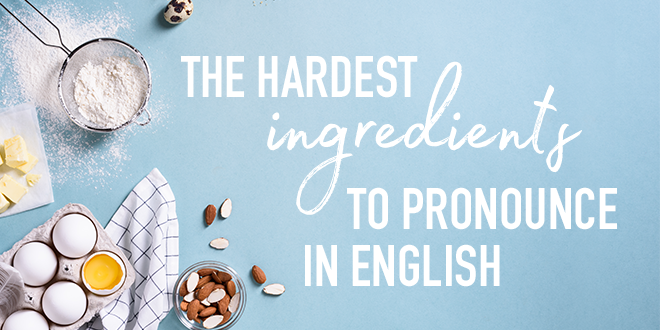 Six Food Names Which Are Hard to Pronounce in English

One of the most common problems for someone learning English is the correct pronunciation of words. Who hasn’t struggled with making sounds like th with their tongue between their teeth? And what about those words that are pronounced differently from how they are written? Not even an English-speaking person can tell you why Greenwich has such a peculiar pronunciation, they just know that it’s pronounced “Greenich.” Even with food, there are some names for traditional dishes that will put even the most fluent speakers to the test.

@abaenglish shows you some of the hard-to-pronounce foods in English.

It is really important to pronounce food names correctly, to not end up with a completely different dish from what you wanted to order. To that end, we have decided to give you some examples of food names which you might find problematic.

It’s true that in a supermarket you can usually just go to the right section without any problems and just take what you are interested in. But, when abroad, have you ever found yourself desperately searching for a certain product while other people just didn’t seem to understand what you wanted? Maybe you were looking for artichokes and followed the employee to the diapers section. This can be really frustrating! Here are some of the hard-to-pronounce words.

It’s a very spicy Thai sauce quite common in the UK. Normally, you would pronounce both the “s” and the “r.” But, for a Thai, the correct pronunciation would be see-ROTCH-ah. Even English-speaking people hardly manage the correct pronunciation. If you want to try, it is best to forget the phonetic subtleties and just pronounce it the English way. The “r” is imperceptible and the “cha” is read “sha.” This is a great sauce to have with noodles and seafood.

This traditional sauce takes its name from the English region where it was created at the end of the 8th century. It’s a seasoning made of herbal ingredients and is essential in some traditional English dishes. It’s great with salads or in meat dishes.

This is an important vegetable in Mediterranean cuisine. It isn’t really common in the UK or the USA. But, if you are one of those who can’t live without them, you had better master the pronunciation. After all, it’s a delicious and healthy vegetable. In order to pronounce it correctly you need to pay attention to the “r,” which in English is barely pronounced.

If you feel like preparing a nice Italian-style aubergine parmigiana, then you must learn to pronounce this word correctly. As shown in the phonetic transcription, the “au” is pronounced “o” and the “r” is once again barely perceptible. The “i” is actually read as an “e” while the final “e” is not pronounced.

Please, could you tell me where I can find Worchester sauce?

How much are the artichokes?

Could you tell me where the fruit section is, please?

What about at a restaurant? Have you ever thought about going to a typical English restaurant to try a local dish? If that’s the case, you should know that despite what many might think, English cuisine is very rich, especially in terms of its meat dishes and pastries. Some of the names are real tongue twisters and some might wonder how they managed to come up with such original names. Would you like to hear some of them? Here is a list.

This name may make you think of a cartoon, but it’s actually the name of a traditional English dish made out of sausage, Yorkshire pudding, and onion. It’s really delicious and a representative of authentic British cuisine. A dish with a similar name and ingredients is Bacon-Wrapped Toads in a Leek-Filled Hole. Enjoy!

This is a vegetable omelette traditionally prepared with the leftovers of the roast from the day before. It was a very common dish during World War II, when food was considered a very precious thing. It’s called this because of the sound made by cabbage when it is being fried.

Could you suggest a typical dish for me?

I would like to have the bubble and squeak.

Could you bring me the bill, please?

Could I please have some salt?

What would you suggest for dessert?

This is just a taste of English cuisine. If you are planning a culinary tour of the United Kingdom, you had better prepare yourself properly. Above all, the most important thing is to speak English well. That’s why ABA English offers its natural method to learn English easily. What are you waiting for? Learn how to communicate in English in any restaurant in the world today!

Yes, I want to try the course!
Yes, I want to download the app!
2018-05-16
Share
Previous Volleyball Vocabulary in English
Next Useful Phrases in English for When You Go Shopping