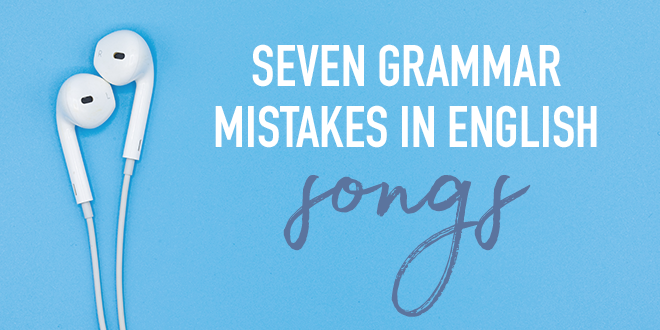 A very effective way to learn English is to listen to and learn songs. It is also true that one should pay close attention to the grammar. As you can imagine, artists are granted the so-called artistic license and, especially in the case of songs, can sacrifice some grammatical rules in the name of composition and rhythm.

@ABAEnglish presents the most shameful mistakes in English songs.

That is why if you have decided to listen to music as a strategy for improving your English, we advise you to read the lyrics well, as you could learn incorrect English. While people are generally lenient with artists, they are usually not so indulgent in everyday conversation. In the following we present you with the seven most embarrassing and obvious mistakes made in English songs.

In English, the rule for using personal pronouns is similar to that in many other languages. The personal pronoun is different from the direct object pronoun. Let’s look at an example:

I go to the supermarket. (I = personal pronoun)

My class chose me as representative for the school games. (Me = direct object pronoun)

Nevertheless, there are many examples of songs where this rule is deliberately ignored:

Yes, the subjunctive is a problem for speakers of a number of languages. While it is true that in English the rule is relatively simple compared to other languages, the fact is that even English speakers can make mistakes. In this case, the rule says that the past subjunctive should use the plural form of the verb “to be” in the singular usage as well. For example, the subjunctive sentence “If I were the president” uses the plural “were” for the singular “I.” Some artists have simplified the matter, falling back on the use of the singular form of the verb “to be.” This really is a beginner’s mistake!

If you want to learn the rule well, listen to Beyoncé’s “If I were a boy,” in which the rule is applied correctly.

In this case, the error is made due to the fact that “to lie” is an intransitive verb, that is, it does not have an object, while “to lay” is a transitive verb and therefore requires an object. It seems, however, that some British and American artists are not very familiar with this verbal classification. To clarify the situation, let’s look at some examples:

I lay my baby in the bed.

(I am doing the action. My baby is the object.)

I lie on the bed.

(I am doing the action. There is no object.)

Now, let’s look at some examples of mistakes in songs:

We recommend that you memorize these songs as well, but don’t forget the rule!

Who among us does not remember the long lists of English irregular verbs that they had to memorize in school? It was a real nightmare, but not only for learners of English as a second language! Let’s look at two examples of irregular verbs used incorrectly.

In the first case, “bleed” is an irregular verb, and the past form is “bled,” but perhaps Justin did not include this verb in the list he had to learn at school. In the second case, the past participle of “fall” is “fallen,” while “fell” is simple past.

Every once in a while, we all make mistakes with subject-verb agreement. Especially when we are writing on the computer, we can put a singular verb with a plural subject, but this should not happen with carefully written song lyrics. Let’s see some examples.

The errors here are too obvious and do not require further explanation.

In some languages, double negatives are used for emphasis. For example, in Spanish they can say “No quiero nada” (Literally, I don’t want nothing.) where both the no and the nothing are negative terms. While this is allowed in Spanish, it is not correct in English. Double negatives, in fact, create confusion. They can be found in a famous song, though.

Spelling is a nightmare for most British and American students and not without reason. The pronunciation of words in English often does not correspond to the way of writing them. It is no coincidence that some artists have even fallen into this mistake. The problem with this is that generations of students could memorize the incorrect spelling, all because of a song.

The correct spelling of this word is tasty, not tastey.

Are You Ready to Find the Mistakes?

These are just some of the mistakes made in famous lyrics in English. While it is true that songs can be a valuable tool for learning a language, it is also true that you should know your English grammar well enough to avoid the risks of learning an incorrect way of speaking. If you are looking for an easy way to learn English grammar rules, we offer 144 video classes as well as many written and oral exercises that will leave your English impeccable.

Yes, I want to try the course!
Yes, I want to download the app!
2018-04-10
Share
Previous Romantic Phrases to Use Before Proposing Marriage in English
Next How to Be a Perfect Londoner